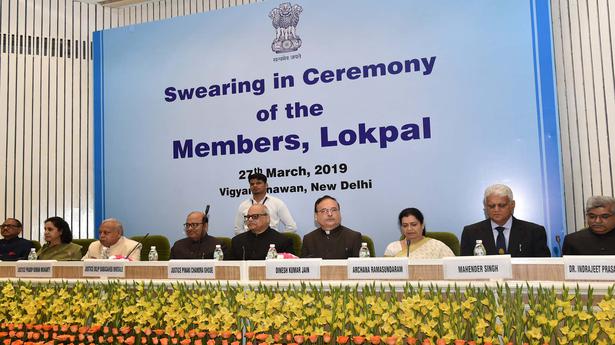 A total of 1,427 complaints were received by anti-corruption ombudsman Lokpal during 2019-20, of which 613 were related to State government officials and four against Union ministers and Members of Parliament, according to official data. It said 245 complaints were against central government officials, 200 against those in public sector undertakings, statutory bodies, judicial institutions and autonomous bodies at central level and 135 were against private persons and organisations.

There were six complaints against State ministers and members of legislative assemblies and four against Union ministers, Lokpal’s data stated.

Of the total complaints, 220 were requests/comments/suggestions, it said.

Of the total complaints,1,347 were disposed of. There were 1,152 complaints beyond the Lokpal’s jurisdiction, it said.

A total of 78 complainants were advised to file complaints on prescribed form, 45 were sent for status/inquiry report and directions to concerned authority were issued for appropriate action in 32 complaints, data showed.

One complaint was pending with the Railway Board for inquiry, it said.

Status report was pending in two cases related to the Culture Ministry, one case each of Ministry of Water Resources, Directorate General of Income Tax, Department of School Education and Literacy, Department of Post and Ministry of Shipping, official data showed.

Also Read | Most cases in Lokpal not under its purview, says chairman Pinaki Chandra Ghose

The Lokpal is the apex body to inquire and investigate into allegations of corruption against public functionaries.

The central government had in March this year notified a format for filing complaints with the Lokpal. Before this was notified, the Lokpal scrutinised all the complaints received by it in any format.

President Ram Nath Kovind had on March 23 last year, administered the oath of office to Justice Pinaki Chandra Ghose as the chairperson of Lokpal.

Also Read | 6 years on, Lokpal is yet to get prosecution wing

The Lokpal’s eight members were administered the oath by Justice Ghose on March 27.

However, one of the Lokpal members, Justice Ajay Kumar Tripathi, died in May this year. Another member Justice Dilip B Bhosale had resigned from the post in January this year.

According to rules, there is a provision for a chairperson and a maximum of eight members in the Lokpal panel.