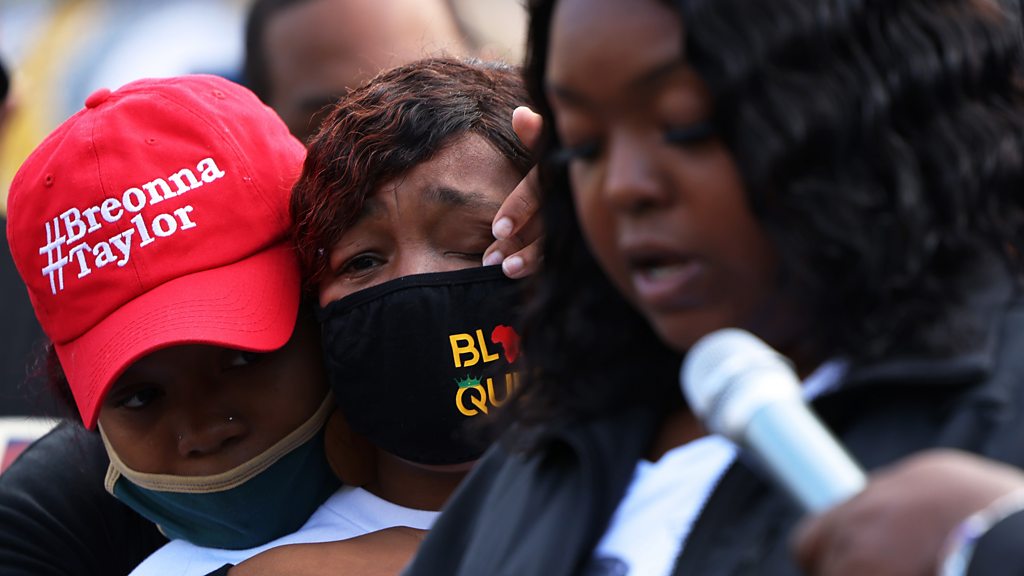 A man accused of shooting two policemen in Louisville, Kentucky amid racial justice protests has been ordered to be held in jail on $1m (£786,000) bail.

Larynzo Johnson, 26, was arrested hours after it was announced that no murder charges would be brought for Breonna Taylor’s death during a police raid.

The decision sparked days of unrest and the city is under a weekend curfew.

Ms Taylor’s family has demanded that a grand jury transcript of her case be released to the public.

The grand jury on Wednesday had returned charges of ‘wonton endangerment’ against one former officer. However, the decision not to lay charges for killing Ms Taylor triggered protests around the US.

Over 127 people were arrested on Wednesday night. On Thursday night, Louisville police arrested at least 27 protesters, including the only African-American lawmaker in the Kentucky legislature.

What does the Taylor family want?

In a news conference on Friday, Benjamin Crump, a lawyer for the Taylor family, led chants of “release the transcripts,” and accused Kentucky Attorney General Daniel Cameron of failing to mount a strong enough case to the grand jury to secure murder charges against the three officers who fired bullets into Ms Taylor’s home in Louisville on 13 March.

Police entered her flat during a drug raid, though none were later found.

“What did Kentucky Attorney General Daniel Cameron present to the grand jury? Did he present any evidence on Breonna Taylor’s behalf?” Mr Crump asked.

“Or did he make a unilateral decision to put his thumb on the scales of justice to help try to exonerate and justify the killing of Breonna Taylor by these police officers?”

Ms Taylor’s family had called for all three officers to be arrested for murder, but only one has been charged. Brett Hankison, who was fired from the police force in June, is accused of wanton endangerment, a low-level felony, for firing shots into Ms Taylor’s neighbour’s apartment.

In her first public statement since the grand jury’s ruling, Ms Taylor mother said she “never had faith” in the prosecutor, Mr Cameron, who is Kentucky’s first ever black attorney general.

“I was reassured Wednesday of why I have no faith in the legal system, in the police, in the law,” Tamika Palmer said in a statement which was read by Ms Taylor’s aunt. “They are not made to protect us Black and brown people.”

“What he helped me realise is that it will always be us against them, that we are never safe when it comes to them.”

What were the circumstances of Ms Taylor’s killing?

Three plainclothes policemen – Mr Hankison, Jonathan Mattingly and Myles Cosgrove – were executing a search warrant on 13 March. They forced their way into the apartment where Ms Taylor, 26, was in bed with her boyfriend, Kenneth Walker, shortly after midnight.

Mr Walker fired a shot from his licensed gun, later telling police he thought that Ms Taylor’s ex-boyfriend, Jamarcus Glover, had broken in, according to the New York Times.

Officials say Mr Walker’s bullet struck Mr Mattingly in the leg. The three officers returned fire, discharging 32 rounds, according to a ballistics report from the FBI.

Ms Taylor was shot amid the commotion and died on the hallway floor.

A timeline of the shooting

Mr Hankison was fired from the police after investigators found he had “wantonly and blindly fired 10 rounds” during the raid, according to his termination letter.

Mr Mattingly and Mr Cosgrove were reassigned to administrative duties.