“This has now begun to impact our mental wellbeing”

Don’t blame us if patients die due to lack of , say doctors; hospital claims only those brought in have died


ABMC-run hospital in Jogeshwari has not been able to supply adequate oxygen to Covid patients, leading to the death of at least 12 people in just two weeks, according to doctors at the facility.

After their repeated complaints about the went unaddressed, doctors at the HBT trauma centre in Jogeshwari, Covid patients have now written a letter to the medical superintendent of the hospital Dr Vidya Mane saying they should not be held responsible for the deaths in the ICU. They have also said in the letter that their mental health is being affected after seeing patients die while gasping for breath.

Around 90 per cent of patients at the 200-bed facility need oxygen supply. “Out of the 25 beds in the ICU, you will find at least 15 machines, which say ‘Low O2 Pressure’, said a resident doctor, on condition of anonymity.

Another resident doctor recalled the harrowing situation he witnessed last week when he was on duty in the ICU. “Two patients were gasping for breath and needed 8 to 10 litres of oxygen per minute. However, the supply was so slow the screen was continuously giving an alert of low pressure O2, and by the time I tried to fix the pressure with the hospital technician, both patients had died.”

One resident doctor was particularly anguished by the death of one patient, 51-year-old Imran.

“It was his fourth day in the ICU. He was doing much better than when he first came in. His oxygen saturation level was also improving. I was sure that he would be out of ICU soon. That day, at least seven ventilators were showing low pressure, so I went to call the technician. By the time I came back in five minutes, Imran had died. His screen was showing ‘Low Oxygen Pressure’. His death saddened me a lot. The ICU has become a depressing place for us. No one wants to be on duty here only because of these conditions,” he told Mirror, adding, “What’s the point of putting in so much of effort if we can’t save the lives of patients because of such issues.”

On Thursday, a 51-year-old Vakola resident came gasping to the hospital. A resident doctor said that they couldn’t admit him as there were no hospital beds with oxygen supply. In half an hour, he passed away.

According to doctors treating Covid patients, most patients who get admitted suffer from moderate to severe breathing difficulty. Each patient needs between 3 to 10 litres of oxygen per minute. “Now you can imagine the need for oxygen at the hospital,” said an ICU doctor. 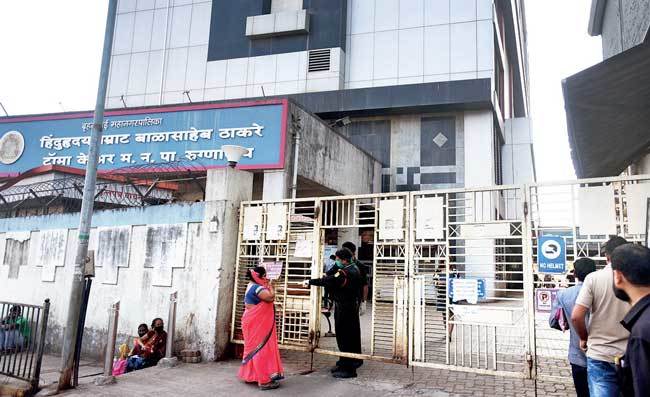 Dr Vidya Mane medical superintendent of the hospital accepted that the hospital is currently struggling to meet the demand of oxygen but she denied any death due to low pressure oxygen supply. “When we started 50 Covid-19 beds the requirement was 100 jumbo oxygen cylinders, now with 200 beds, we have increased the cylinders to 350. It is true that our demand is more, because currently we are getting many critical cases, nearly all of them need oxygen support. Patients have died because they reached the hospital in a critical stage,” said Dr Mane.

She added that, just on Thursday, the hospital has placed an order for 500 cylinders after resident doctors brought the issue to her notice. Dr Mane further added that the HBT trauma hospital is not fit for installation of a large oxygen liquid tank as per fire safety norms. “We are trying to resolve this problem by installing a medical oxygen generation plant,” she added.

Bars and clubs allowed to reopen