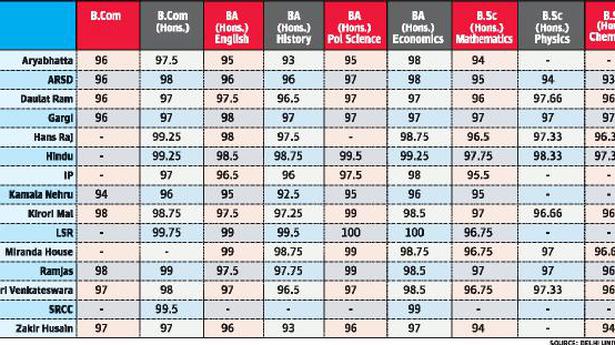 Last year, the cut-off marks for economics and political science at the college was 98%, while for psychology it was 98.75%.

The cut-off for the same subject in Hans Raj and Miranda House is 98.75%, while at Kirori Mal College (KMC) it is 98.5%. Off campus colleges like Atma Ram Sanatan Dharma (ARSD) and Aryabhatta Colleges set the cut-off for economics at 98%.

Political science also saw a rise in cut-offs with Hindu College asking for 99.5%, followed by Miranda House, KMC and Ramjas College setting the cut-off at 99%.

Courses like BA (Hons) Journalism has an asking score of 99.5% at LSR and 98% at Delhi College of Arts and Commerce (DCAC).

Admission to the university this year is entirely online and officials have urged applicants not to visit college campuses.

The admission portal will be open from Monday and students can select their course and college as well as submit relevant documents.

Verification of documents will also take place online this year. The portal for admissions under the first list will be open till October 14 and students can pay the fees by October 16.

DU officials said that a suggestive calculator will also be available to applicants in order to ascertain their respective eligibility to the various courses in different colleges.

Under one particular list, students can apply to a single college and course, for which officials have advised aspirants to check before submitting the applications.

Nearly 70,000 undergraduate seats are up for grabs.

Officials of the university had said that cut-offs would be higher this year owing to more students scoring above 90% marks in Central Board of Secondary Education examinations.

The new session will commence from November 18.