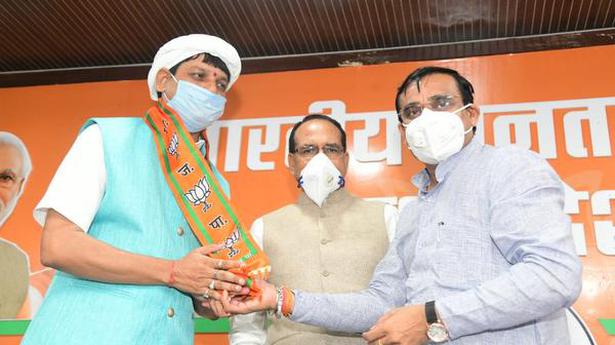 A Congress MLA from the Bundelkhand region of Madhya Pradesh resigned on Sunday and joined the BJP, dealing another jolt to the Congress.

Kunwar Pradyumna Singh Lodhi, MLA from Malhara in Chhatarpur district, joined the BJP in the presence of Chief Minister Shivraj Singh Chouhan and State party president V.D. Sharma. Later, he was appointed chairman of the M.P. State Civil Supplies Corporation Ltd.. “He will have the status of a Cabinet Minister,” the Chief Minister’s office said.

“This is important for the development of Bundelkhand. I have come as a soldier of the BJP without any condition,” said Mr. Lodhi after joining the party. “My priority is the region’s development and work on irrigation schemes should be expedited so that migration from the region stops.”

Only through the BJP the region could be developed, he added. “Because of the COVID-19 pandemic, many people who migrated have returned. Bundelkhand needs employment opportunities and irrigation schemes,” said Mr. Lodhi, adding that Mr. Chouhan had approved an irrigation scheme in his constituency.

With Mr. Lodhi’s resignation, the Congress numbers in the Assembly have dropped to 91. In March, 22 of its MLAs who supported rebel leader Jyotiraditya Scindia had resigned precipitating the fall of the Kamal Nath government and later joined the BJP. Eleven of them have been appointed as Ministers in the Shivraj Singh Chouhan government. The strength of the Assembly now stands at 205.

Delhi: Fancy this! 0009 is a seven-digit number | Delhi News – Times of India