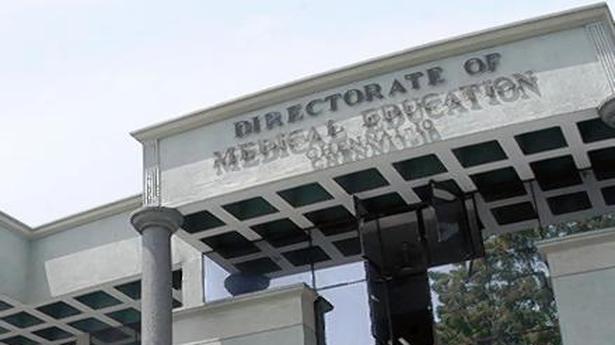 The Madras High Court on Thursday came down heavily on the Directorate of Medical Education (DME) for having given away on a “platter” about 100 post-graduate medical seats, which were filled by private medical colleges under the management quota with less meritorious candidates this year.

Justice N. Anand Venkatesh expressed anguish over the “attitude” of the DME and its Selection Committee in not having taken proper steps to conduct mop up counselling for management quota seats and instead having permitted the colleges to fill them up on their own.

“This may perfectly suit the private colleges but then it is done at the cost of overlooking merit,” the judge said and pointed out that meritorious candidates had lost the chance of being accommodated in better courses because of the failure to conduct mop up counselling on time.

The observations were made while passing interim orders on a writ petition filed by M. Keethanjali, who scored 524 marks in National Eligibility-cum-Entrance Test (NEET) for PG admissions and was allotted M.D. (Microbiology) in regular counselling held in May.

No mop up counselling

She wanted to take up M.D. (Paediatrics) during the mop up counselling process but it was never conducted.

Instead the seat was given to another student, who had scored just 298 marks in NEET, on the basis of permission given by the DME to private colleges to fill up the seats.

“At some stage, this court has to ensure that similar instances do not occur in future. There must be a mechanism to ensure that the selection process takes place strictly in accordance with the Medical Council of India regulations and guidelines issued by the Supreme Court.”

“The respondents cannot be allowed to create a situation and thereafter water down the selection process, which ultimately results in less meritorious students getting the seats and private colleges profiteering from the same,” the judge said.

He sought an explanation from the DME by October 15 for not having filed a petition in the Supreme Court on its own for extension of the last date for medical admissions this year so that mop up counselling could be conducted and meritorious students could be admitted.

The judge also wanted to know all details, such as names of candidates who were allotted seats in management quota seats of private colleges after grant of such permission by the DME, their NEET scores, the branch of medicine allotted to them and the name of the institution.

He wanted the details to be submitted on October 15 for passing further orders.