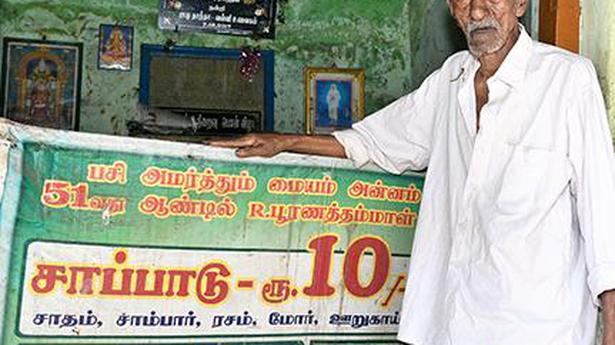 The 91-year-old, who made sumptuous south Indian breakfast items, including idli, dosa and pongal, as well as wholesome lunch, with the sole intention of making meals affordable, will be dearly missed by his customers and relatives, say members of his family.

M. Alagu Murugan, his 35-year-old grandson, says he learnt the concept of kindness at the eatery.

“When I was going to school, the meals were priced at ₹2 and later at ₹5. I would always wonder how we managed at home, given that we were never particularly affluent,” he recalls.

“One day, I asked my grandfather, and he patiently explained to me the need to give to those who have less than us. The lesson stuck,” he says.

Mr. Alagu Murugan recalls several moments when his grandfather, besides providing free meals to those who could not afford to pay for their lunch, gave them money for their bus fare.

“My grandfather was shaken when his wife Poornathammal died in 2015. It was very painful for him. Ever since, he would frequent his village Villoor in T. Kallupatti block and come back on other days to run the shop. In the beginning of 2020, he began falling seriously ill. His health took a turn for the worse during the lockdown starting March,” he said.

Mr. Ramu is survived by a son and daughter.

His grandson says the family will begin another such hotel once the lockdown ends.

“My grandfather wanted this hotel to be his legacy. We will carry on his work. We are confident that people will line up just like they did in front of his shop,” he added.

Amid lockdown, KMC registers a rise in births