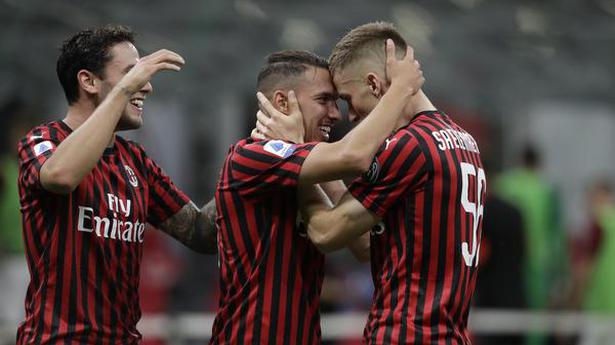 Algerian midfielder Ismael Bennacer scored his first Serie A goal as a rampant AC Milan thumped Bologna 5-1 to maintain their excellent recent form at the San Siro on Saturday.

Alexis Saelemaekers also scored his maiden goal for the club to go with strikes from Hakan Calhanoglu, Ante Rebic and Davide Calabria as Milan overwhelmed the visitors and might have won by a greater margin.

They move to 56 points from 34 games to take a grip on sixth place, the final Europa League qualifying spot, and keep up their record of scoring two or more goals in all eight Serie A matches they have played since the resumption of the season.

Bologna, who are 10th on 43 points, looked lethargic and created little in the Milan penalty area, but did score just before halftime through Japan international defender Takehiro Tomiyasu, his first for the club.

The result is further confirmation of the work of Milan coach Stefano Pioli in providing the side with more of an attacking threat as they hunt a European place for next season.

They opened the scoring on 10 minutes following a superb move that oozed class Rebics clever backheel set Theo Hernandez free on the left wing and his cross was dummied by Zlatan Ibrahimovic into the path of Saelemaekers, who side-footed home.

Bologna’s Takehiro Tomiyasu of Japan, shoots to score during a Serie A soccer match between AC Milan and Bologna, at the San Siro stadium in Milan, Italy, Saturday, July 18, 2020.


The home side continued to create openings almost at will, and added a deserved second midway through the first half, albeit via a gift from Bologna goalkeeper Lukasz Skorupski, whose attempted clearance fell straight to Calhanoglu and the Turkey international applied a simple finish.

Franck Kessie hit the post as Milan kept up their high-tempo start, but it was the visitors who scored next with a rare foray forward, centre back Tomiyasu crashing a shot into the top corner from the edge of the box to make the halftime score 2-1.

The two-goal advantage was restored minutes into the second half though as Bennacer burst into the box and provided a powerful finish to break his Serie A duck.

Rebics excellent shot on the turn added a fourth before the hour-mark as Milan pulled clear, before substitute Rafael Leao had an effort cleared off the line.

Leao then set up Calabria for a simple finish as the home side recorded their biggest victory of the season.