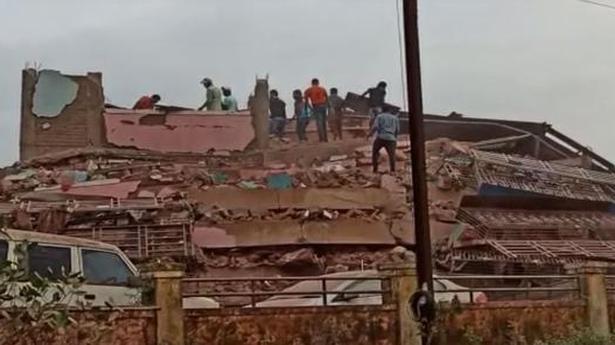 A five-storey residential building in Mumbai’s neighbouring Raigad district’s Mahad collapsed on August 24 evening. It has been stated that rescue work has begun.

According to initial reports, at least 80 people are feared trapped. The building houses around 40 families. According to officials 25 people have been rescued.

The cause of the accident was not clear but building collapses are common during June-September monsoon, with rickety structures buckling under the weight of non-stop rain.

Here are the updates:

“The collapse of a building in Raigad, Maharashtra is very tragic. Have spoken to DG @NDRFHQ to provide all possible assistance, teams are on the way and will be assisting with the rescue operations as soon as possible. Praying for everyone’s safety,” Union Home Minister Amit Shah tweeted.

‘Some sensed that building was shaking’

Bharat Gogawale, MLA from Mahad, said, “The collapse happened with a huge noise. While most of them are stuck inside, some had managed to run away after they sensed that the building was shaking. Of the 15 rescued, only two were rescued from the rubble, the others had managed to come out themselves. The rescue operations need machinaries and more manpower. Till the time it reaches us, we are doing our best.”

Information officer from Raigad said, “Prima facie, it is learnt that one Yunus Shaikh and Patel were the contractors of the building. Around 25 labourers, one gas cutter, genset, two JCBs, two dumpers, three ambulances along with doctors have reached from Mangaon.”

Raigad collector Nidhi Chaudhary told The Hindu, “NDRF teams were informed immediately after the incident was reported. Three teams are coming from Pune and hence, it will take some time… till then, the fire and local authorities are conducting the rescue operations. The building was just 10 years old, hence age of the building is not the reason behind the collapse. Construction quality could be the reason, and will have to be looked into.”

Maharashtra Chief Minister Uddhav Thackeray has assured the District Collector and local MLA that all possible support will be extended for speedy rescue and relief works.

Rescue teams and canine squads were deployed to the scene of the accident, a statement from the National Disaster Response Force (NDRF) said.

(With inputs from AFP)