Braving hostile terrain, thick fog and heavy rain in Karjat, 100 engineers work around the clock for days to restore city’s .

Almost 100 engineers worked around the clock in shifts for five days, braving a dense forest, wild animals, inhospitable terrain, thick fog and heavy rain to restore a power line that had snapped in Karjat on October 10. This disruption was the first in the sequence of events that resulted in the massive grid failure and rare, hours-long outage that Mumbai experienced two days later. Now that the issue has been rectified, the transmission line will resume the supply of 500Mw of power to Mumbai from other parts of the country.

So remote was the snapped power line that it took the engineers, from the Ltd (MSETCL), a whole day just to reach the location by hacking their way through a dense forest. The power line, on the Talegaon-Kalwa 400kV network, was connected by two huge, A-shaped transmission towers separated by a kilometre. Though this may not seem like much, one of the towers stands atop a fog-shrouded hill and the second in the valley below, with nothing but lush forest, home to wild animals, in between. Because of the inhospitable terrain, when heavy rain hit the area on Wednesday, three of the engineers were left stranded atop the hill for more than 24 hours without .

While they set out to repair the cable on October 10 itself, it took the first group of engineers an entire day just to reach the hill-top tower. “Progress was very slow as we had to cut and trim trees and bushes to find the broken cable and make it to the top of the hill,” said one of the engineers.

One of the engineers told Mirror, “Though the two towers were just a kilometre apart, the thick jungle and steep incline made this a huge challenge. On top of that, the whole area was covered in fog and it was raining constantly.” An MSETCL official said the slope leading down to the valley was at an angle of 75 to 80 degrees — dangerous enough by itself, but made worse by the limited visibility and possibility of encountering a wild animal.

An MSETCL official said, “The terrain was difficult and due to the rains there was heavy fog, making visibility an issue. For four days, almost 100 men and women worked in shifts to rectify the technical failure. On Wednesday evening, three of them got stranded on top of the hill because of the heavy rain.” 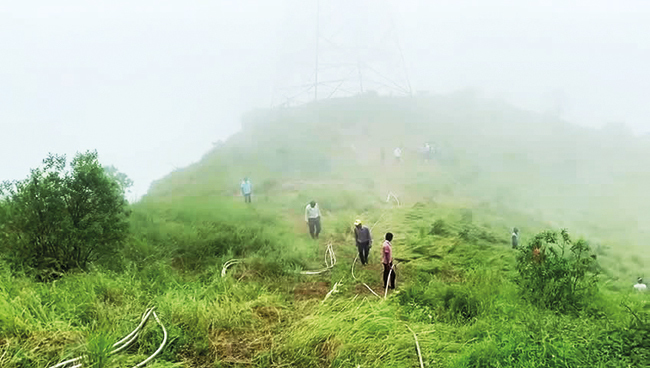 One of the three engineers who were left stranded, said, “We reached the top of the hill around 4 pm on Wednesday. But because it was raining constantly, we could only leave the place at 7 pm this (Thursday) evening. We only had a 300-watt light on us, which we kept switched on all through the night as protection from wild animals. It was raining heavily and we had only plastic bags to cover our heads. We survived on just two packets of biscuits.”

Dinesh Waghmare, chairman and managing director of MSETCL, said, “They were stuck with no food or warm clothes. It was especially dangerous as the area is covered with dense vegetation known to be home to wild animals.”

After this snapped on October 10, the Kalwa-Padga circuit-1 line tripped at 6.54 am on October 12, followed by the Kalwa-Padga circuit-2 at 9.58 am and the Kalwa-Kharghar line at 10.23 am the same day, resulting in a massive grid failure that led to the Mumbai-wide power outage. Electricity carried on these power lines, which are connected by tall, A-shaped towers, is first converted before being distributed to households. Some of the major entry points in Mumbai’s transmission network are Salsette, Kalwa, Borivali, Vikhroli, Kharghar and Versova. 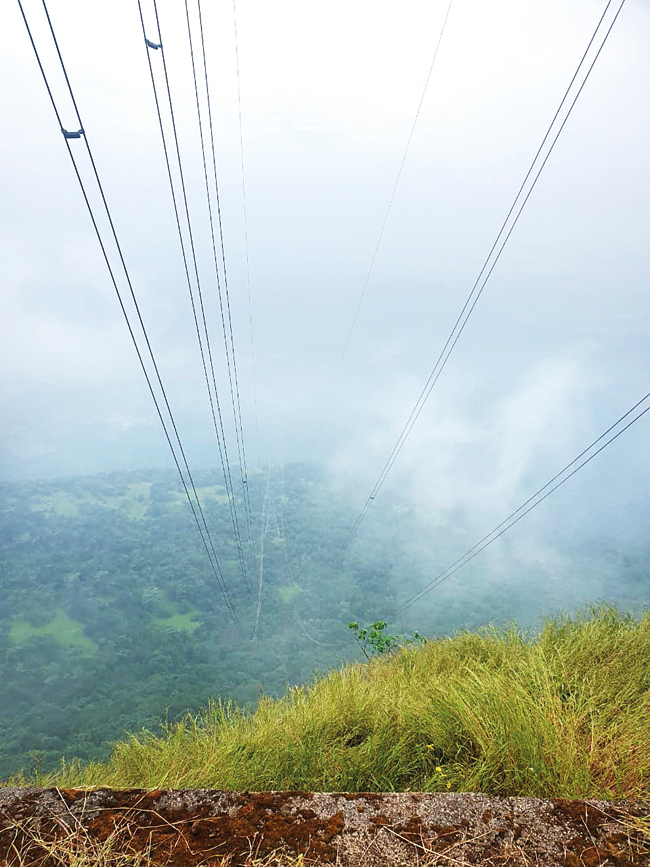 For four days, almost 100 men and women worked in shifts to rectify the technical failure.

Meanwhile, had said on Wednesday that sabotage could not be ruled out in the October 12 power outage. He said, “Our team was working on the and the load was shifted from circuit 1to 2. But there was a technical problem and the Kharghar unit stopped. There was islanding in Mumbai, which shouldn’t have happened. This is the reason we are suspecting sabotage”. Islanding in the process by which the city separates itself supply-wise from the grid in emergencies. Raut has also set up a technical committee to look into the incident.

Mumbaikars were in for a shock on Monday morning after several parts of the city faced a major power outage. The power cuts were witnessed in Mumbai, Thane, Navi Mumbai, Mira Bhayandar and other parts of the region. The Brihanmumbai Electric Supply and Transport said this was due to interruption in incoming electric supply. Photo by Deepak Turbhekar/MMCL

Local trains grind to a halt

Local train services came to a halt due to the power cut, causing inconvenience to hundreds of commuters. Some passengers, who had already boarded the trains before the power cut, were seen walking on the tracks from Marine Lines to Churchgate during the peak hours. Train services stayed suspended between Churchgate to Borivali on the Western line and on the Kalyan line from CSMT on CR from 10.05 am.

Inconvenience to essential service providers who travel by trains

Even though train services are not available for all commuters to prevent overcrowding in the wake of the Covid-19 pandemic, those in the essential services’ staff, state and central government staff are among those who have been allowed to travel by train. According to preliminary information, the electric supply of the entire western region is tripped and will take at least 2 hours to restore.

The commuters stuck at various stations have decided to take cabs and other means of transport to reach their workplaces.

The Brihanmumbai Municipal Corporation (BMC) has asked the hospitals across the city to contact their respective SWM transport GARAGE officers to get enough supply of diesel for at least eight hours so that there is no power failures in hospitals especially ICUs. The civic body has also appealed to Mumbaikars to call on 022-22694727, 022-226947725 and 022-22704403 in case of emergencies. Photo by Deepak Turbhekar/MMCL

Security personnel were seen helping the passengers who wanted to get down from suburban trains which were in midsection during power outage. Image source: Twitter/ @Central_Railway

As commuters resorted to various other means of transportation after local train services in Mumbai were disrupted, heavy traffic was reported from various parts of the city. Photo by Deepak Turbhekar/MMCL

Banks have also been shut down due to electricity failure in Mumbai. The ATMs of several banks are also not working. Meanwhile, many shops in Mumbai are facing inconvenience and are having a hard time to keep their work going. Photo by Raju Shelar/MMCL

Traffic signal not operational in Bandra

Due to power failure, traffic signal was not operational at Lucky Hotel junction in Bandra West. Photo by Satish Malavade/MMCL

Candles used at a restaurant in Bandra due to power failure