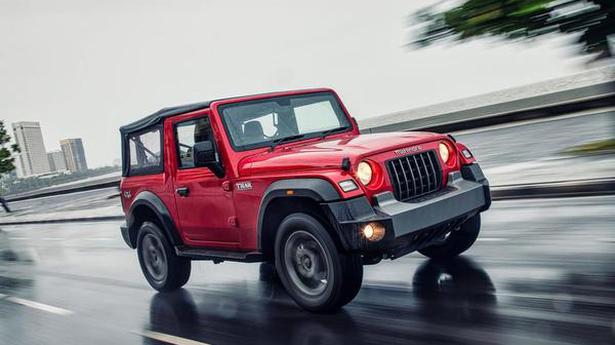 Mahindra & Mahindra Ltd. (M&M) has opened the online and offline bookings for the new Thar SUV from Friday and said the delivery of the vehicle will start from November 1, 2020.

Thar has been introduced on the occasion of M&M’s 75th anniversary, with a price range of ₹9.8 lakh and ₹12.20 lakh for the basic AX four-wheel drive manual transmission range.

The four-wheel drive with automatic transmission is priced between ₹13.45 lakh and ₹13.75 lakh.

The Thar comes both in petrol and diesel variants.

To begin with, the company has opened test drives at 18 cities from Friday and test drive will be made available in 100 cities by October 10 and the rest of India from October 15, 2020.

Dr Pawan Goenka, MD & CEO, M&M said, “Over the years, the Thar has been a part of Mahindra’s rich history and has found its way into the hearts of many as an object of desire. On the occasion of the Group’s 75th anniversary, we have written another chapter in its glorious history.

“In its all new avatar, the Thar is a notch higher in its timeless appeal, owing to its ability of being as comfortable on paved roads, as it has always been off-road. We are confident that the Thar tribe will grow stronger as a new set of customers come into its fore, in addition to the traditionalists,” he said.

Rajesh Jejurikar, ED, Auto & Farm Sectors, M&M said, “Since its unveil, the response has been phenomenal, clearly proving to be one of the most awaited launches this year. We believe our attractive pricing will appeal to the adventure lovers as also to the urban lifestyle seekers.”

Veejay Nakra, CEO, Automotive Division, M&M said, “It has been a labour of love for everyone at Mahindra and we are confident that it will make a lasting imprint as India’s most desirable, yet affordable SUV.”