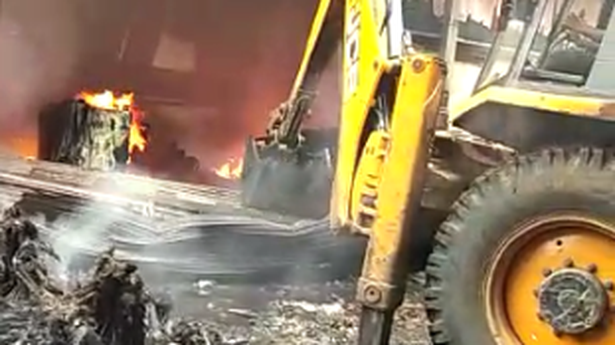 Over 100 fire-fighters with water tankers and foam tenders fought the flames, and brought the fire under control around noon, an officer said

High-value electrical equipment and other items stored in a warehouse of the Integral Coach Factory (ICF) in Perambur were gutted in a major fire that broke out in the early hours of Saturday.

Sources said the fire erupted from the warehouse at around 3 a.m. Immediately after the receipt of an alert call, personnel from Fire and Rescue Services reached the spot and began fire-fighting operations.. Personnel from Fire Stations in Villivakkam, Koyambedu, J.J. Nagar, Egmore and Sembium came to the spot and joined the efforts to bring the blaze under control.

Station Officer Suriya Prakash said, “We began the fire fighting at 3 a.m. More than 100 personnel with water tankers and foam tenders were pressed into service. At around noon, we brought the fire under control.”

The cause of the accident was not immediately known. However, personnel suspected it could have been caused by an electrical short circuit.

The battle for Esa Eri rages

Gazing into the future