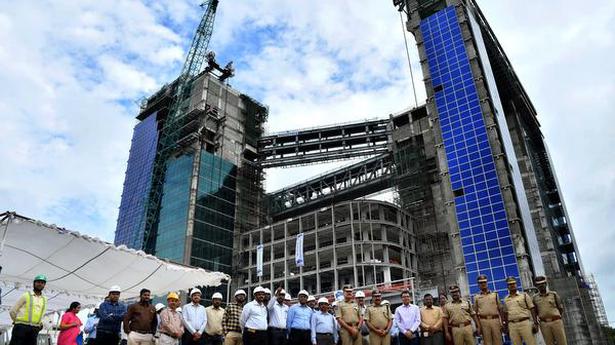 In a significant development, two iconic projects — Telangana Martyrs’ Memorial and the Integrated Command Control Centre of the city police — have been registered with the Indian Green Building Council (IGBC) of the Confederation of Indian Industry coinciding with the World Environment Day on Friday.

The registration with the IGBC, the council registered by the World Green Building Council, follows the norms followed for sustainability with minimum impact on environment and ensuring energy savings of at least 30% and saving in water consumption by around 20% to 30% as compared with the conventional buildings. The command and control centre is a prestigious project taken up by the State government with cooperation between different departments, said Roads and Buildings Minister Vemula Prashanth Reddy.

In addition, they had been designed in such a way that they would be easily accessible to the differently-abled and senior citizens incorporating latest building automation technologies like lightning controls, CO2 monitoring and other features.

The Minister said Telangana emerged as the best performing State in promoting inclusive and sustainable growth and the R&B department took steps to ensure that these two structures complied with the norms of the IGBC.

Director General of Police M. Mahender Reddy said the command and control centre was first-of-its-kind project envisaged as technology fusion centre that would be utilised not only by the police but also other departments associated with development.

The building would be ready for use soon.

R&B engineer-in-chief I. Ganapati Reddy said these projects were designed and constructed incorporating the concepts of enhanced building performance and healthy space for building occupants. Building occupants would be in constant interaction with nature.

George Pell: Cardinal to return to Rome for first time since...