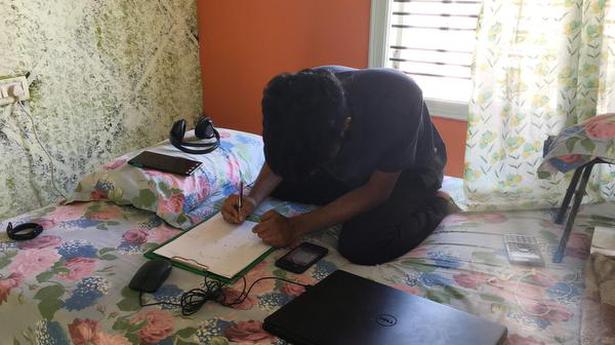 A first-year student of a city-based medical college spends two hours a day in front of her laptop to attend online classes. Earlier this week, as a teacher spoke about salivary glands, she and her classmates had a hard time visualising them. “During regular classes, we would cut open the glands and analyse where it is located inside our bodies. But imagining all this even though we are shown pictures during online classes is very challenging,” she said.

Students who have been attending online classes for the past two months say they are struggling to understand concepts without hands-on exposure. The student said many tend to skip classes as they are unable to grasp the concepts. She also said that while they used to have six-hour classes — two for theory and the rest for practicals — now they log on for just two hours of online classes daily. “We have theory classes but are unable to correlate the concepts as there are no theory classes. The online classes serve little or no purpose at all,” a second-year medical student said.

Students also said there are often technical glitches such as the slides in PowerPoint presentation not changing and the teacher’s voice being inaudible.

What makes it more difficult is that the classes are not interactive and the students can only ask questions on the chat windows. In fact, many colleges have disabled the chat windows after students used them to discuss irrelevant topics in unparliamentary language.

Because of issues in Internet connectivity, many colleges have also sent pre-recorded videos for students to watch and learn. The students also have had internals online. While the theory examination was an open book exam that they had to write online, online viva was held for the practicals.

Many students also complained that as they have limited number of online classes, they are being bombarded with assignments — many of which, they allege, don’t add value to their learning.

Medical and dental students are also worried about the cascading effect all this will have on their exams. “We definitely need a crash course before appearing for the exams so that we understand the concepts more effectively. All we are doing now is memorising without actually understanding concepts,” said a second-year dental student.

S. Sachidananda, Vice-Chancellor of Rajiv Gandhi University of Health Sciences, said there have been a few complaints regarding online classes, but about 85% of students were attending the classes. He said the exam that was supposed to take place in June was now likely to be held in July. Many medical and dental colleges are hoping to conduct a crash course after the lockdown.

While most students are unhappy with the new arrangement, college managements are hoping these classes will become a norm. “Online classes are very cost-effective for us. We spend almost half the amount on online lecturers as compared to physical lecturers. If the government takes a decision, college managements can share their teaching resources and the cost of medical education can be reduced drastically,” he said.

Another senior official at the university said online classes had some pros and the best lectures could be stored in a repository for students to refer to during exam preparation.

With social distancing becoming the norm, RGUHS plans to conduct a virtual convocation. It will go ahead with the preparations once the Governor gives the nod.

While some officials will be present on the dais, students can log in virtually. “It will be similar to a regular convocation. When we tell students that the graduating class can rise, they will have to take the oath standing in front of their computers. The gold medallists will also be awarded medals virtually,” said S. Sachidananda, Vice-Chancellor of the university.