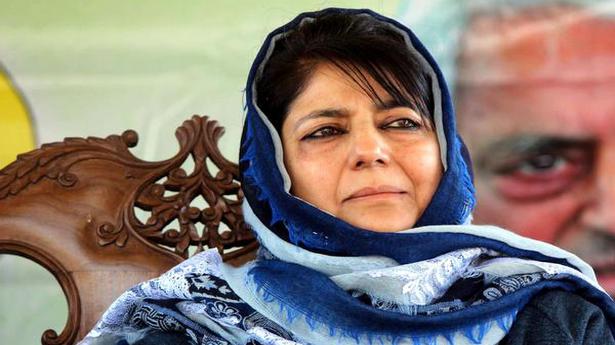 Mehbooba was first detained under Sections 107 and 151 of CrPC but later booked under the controversial Public Safety Act.

The J&K administration on Tuesday revoked the Public Safety Act (PSA) against former Chief Minister and Peoples Democratic Party (PDP) president Mehbooba Mufti, who arrested in the backdrop of the Centre’s move to revoke J&K’s special status on August 5, 2019.

“In exercise of powers conferred under Section 19(1)  of the J&K Public Safety Act (PSA), the government revokes the detention order dated February 5 and extended for a period of three months on July 31, 2020 against Ms. Mufti,” an order issued by Shaleen Kabra, principal secretary, Home, said.

Iltija Mufti, daughter of Ms. Mufti who has been running the official Twitter account of her mother since her detention, said, “As Ms. Mufti’s illegal detention finally comes to an end, I’d like to thank everybody who supported me in these tough times. I owe a debt of gratitude to you all. This is Iltija signing off”.

Ms. Mufti served his jail period in two separate sub-jails in Srinagar before she was shifed to her official residence, which was also converted into a sub-jail till Tuesday.

Immediately after her release, a PDP spokesman said Ms. Mufti will address a press conference in Srinagar on coming Friday.

Ms. Mufti has not issued any statement ever since she was arrested last year. She was the last senior mainstream leader to be held in Kashmir. Earlier, National Conference (NC) president Dr. Farooq Abdullah and vice president Omar Abdullah were also released.

“I’m pleased to hear that Ms. Mufti has been released after more than a year in detention. Her continued detention was a travesty and was against the basic tenets of democracy. Welcome out Mehbooba,” Mr. Abdullah tweeted.

Ms. Mufti is among the top regional leaders of J&K who advocates a joint struggle for restoration of J&K’s special status under the banner of the Gupkar Declaration, which has around seven regional parties, including the NC, the Peoples Conference and the Congress, as part of it.