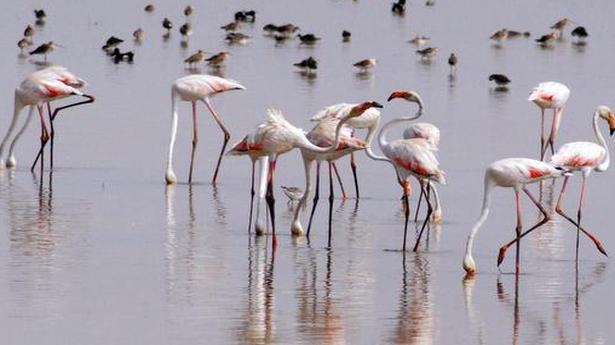 Bird watchers will not be disappointed this year as the Pulicat lagoon and its surroundings in Nellore district brim with water to beckon the winged visitors in a big way.

With the major reservoirs, which include Somasila and Kandaleru, getting bountiful inflows due to the floods in several spells in the Krishna, the arrival of the migratory birds, which include the flamingos, to the picturesque lagoon has begun.

“The flora and fauna at the lake, the country’s largest brackish water ecosystem after Chilika Lake in Odisha, is conducive for the arrival of the winged visitors from far away land in large numbers to their winter home this year, coinciding with the northwest monsoon period,” Sullurpeta Divisional Forest Officer (Wildlife) D. Ravindranth Reddy told The Hindu.

Thousands of local birds thrive at the 759 sq-km Pulicat lagoon, thanks to good water flow in Arani, Kalangi and Swarnamukhi rivers.

“The arrival of migratory birds can be expected to peak in the next two to three months,” he said.

Pulicat Lake is the winter home for a variety of aquatic and terrestrial birds such as painted storks, large and little egrets, grey pelicans, grey herons and water birds such as northern pintails, black-winged stilts, northern shovellers, common teal, seagulls, terns, sandpipers, and the common coots.

Egrets, terns, ducks, and waders have also make a sojourn to the lake in good numbers. Invertebrates such as prawns, plankton, coelenterates, annelids molluscs and echinoderms thrive as also monitor lizards, calotes, cobra, Russell’s viper, and krait, and schools of fish such as sable fish, sargin fish, white, black and silver pomfret.

About 189 bird species, including 50 migratory species, make it to the bird sanctuary, which is also home to Barringtonia acutangula tree species that can survive even in flooded condition.