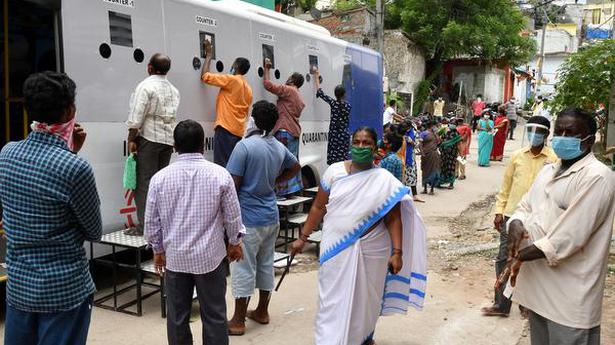 
Mobile collection of samples with online booking of slots to arrest the trend of serpentine queues of people awaiting testing, a designated officer from Directorate of Public Health to monitor daily admissions, discharge, billing issues, etc., in all hospitals and a central dashboard with bed availability linked through these liaison officers providing real-time data and solutions are the need of the hour, say public health experts.

The government should also reinforce the 5Ts — Tracing, Tracking, Testing, Treating supported by adequate Training, and skilling of health staff.

“The 5Ts cannot be sacrificed even if it increases the work load on the public health system. Even if three contacts can be traced out of five possible, it will significantly reduce further spread,” asserted Indian Institute of Public Health (IIPH)-Hyderabad director G.V.S. Murthy on Tuesday.

Mobile collection of samples will prevent “intermixing of infected and non-infected patients for more than 15 minutes in close proximity” as this can spread transmission, he said, adding that unnecessary hospitalisation should be avoided. It is because hospital stay itself increases risk of other infections by 10-20%. Mild cases should go for home isolation with a dedicated tele-consultation portal and a 24/7 helpline to support.

Mobile team of doctors and nurses should visit such people at least twice a week, keep an eye on worsening symptoms and decide when they should be provided priority admission by referral through the team, advised Dr. Murthy.

He pointed out that the case load in Telangana, especially Hyderabad, continues to rise with ‘real time production’ (Rt) being >1 till August 2 and dropping to <1 from August 5. “If Rt is consistently < 1 for 7 days, it will indicate the peak infection load in the present wave has passed. Hence, government will need to see that no big new influx of cases occurs as that may alter the situation once again,” he cautioned.

“Positive news is the dip in new infections in GHMC area which could be due to either a large number of people infected so that the virus is not finding enough susceptible people to pounce on. Or else, it could be that people are not being ‘naughty’ and not gathering in large groups clandestinely. Only means of knowing is by sero-surveillance of random testing of people for presence of circulating anti-bodies,” he said.

The worrisome part, however, is that the pandemic has spread to other districts which needs urgent attention. A two-pronged attack with community-led efforts of residential welfare associations and village panchayats can augment the success of a government-led initiative. The 5Ps — protective gear use, personal hygiene, prevent ‘naughty behaviour’, physical distance and peer support — instead of stigma should be diligently pursued, he added.

International flights to remain suspended till October 31 – Times of...

Mumbai: Cycles to be donated to under-privileged as part of Daan...