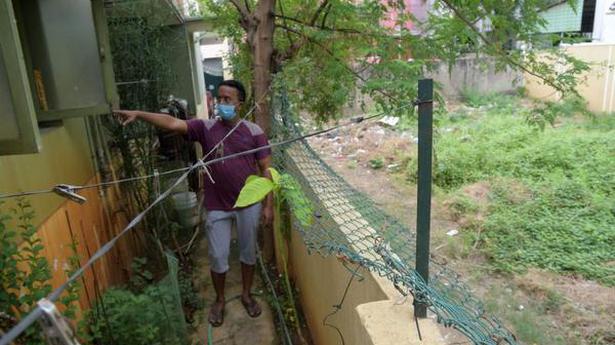 Fed up by the regular burglary attempts in their locality during the lockdown period, residents of Ambika Street in Golden George Nagar, Mogappair East, have formed a group to patrol the locality on a daily basis to nab a thief — a frequent visitor.

There are over 75 houses on Ambika Street, and due to the lockdown many residents have gone to their hometown and their houses are locked. “We have been noticing regular break-in attempts over the past few months. The CCTV footage shows a youngster trying to break in. The same person even stole a bike from the adjacent street,” said G. Prem Kumar, a retired government official, who has lodged an online police complaint.

Mr. Prem Kumar said that there are many senior citizens living on the street, and they are worried about their safety. “In the morning, we stay indoors due to COVID-19 and in the night we have to be wary of the burglar,” he said.

As the burglar keeps visiting the area in the nights, the residents have decided to start a patrolling team. “A few days ago, we spotted the thief entering a flat and seeing us, he sped away on his bicycle. As we started chasing him on bikes, he dropped his bicycle and a sack and ran into a canal. Inside the sack, we found electrical wires,” said Feroz Khan, another resident of the street.

Residents suspect that the burglar is trying to break into the locked houses. Burglary has been a menace for the past few months, they say.

Christopher Maria Joseph, another resident, lost birds worth ₹50,000 that he had on his terrace a few months ago. “We hear people walking on the terrace. He has been hopping from one house to another and makes regular break-in attempts without any fear. We suspect it is the same person,” he explained.

The residents want the police to also increase patrolling in the locality. “Police patrolling here has reduced after the lockdown began,” said a resident.