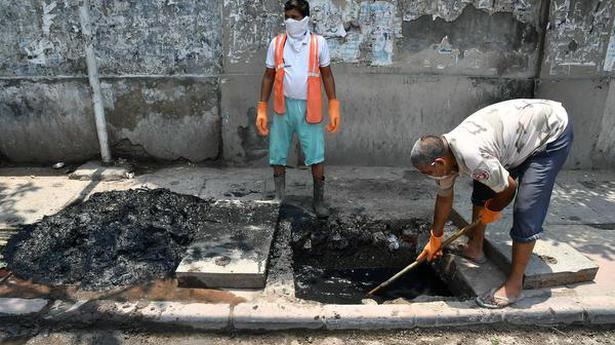 The Indian Meteorological Department (IMD) on Tuesday afternoon said that the Southwest Monsoon has further advanced to Uttar Pradesh and Uttarakhand and that conditions are favourable for it to advance to Delhi in the next 48 hours.

Humidity hovered between 63% and 86% but no rainfall was recorded.

The impact-based forecast for heavy rainfall shows that moderate rain/thundershowers accompanied by gusty winds (30-40 kmph) is expected to occur till Friday, with heavy rain likely at isolated places on Thursday.

The forecast added that major traffic disruption on roads, increased chance of vehicle accidents and water accumulation in low-lying areas and on roads are expected. “Check for traffic congestion on your route before leaving for your destination. Follow any traffic advisories that are issued in this regard. Avoid going to areas that face waterlogging problem often,” the IMD said.

The forecast for Wednesday reads: “Generally cloudy sky with light to moderate rain/thundershowers accompanied by gusty winds. Maximum and minimum temperatures should be around 35 and 26 degrees Celsius respectively.”

Meanwhile, East Delhi Mayor Anju Kamalkant met officials of various departments to review the desilting of drains as part of preparations for the monsoon season.

At the meeting with officials of the Public Works Department, Irrigation and Flood Control Department, Delhi Development Authority and municipality, the Mayor asked them to ensure speedy desilting.

During the meeting, most of the departments under the Delhi government claimed that they met had their target of desilting, a statement from the East Delhi Municipal Corporation read.

Civic body officials also identified certain hot spots where waterlogging during the monsoon tended to be a problem. These included areas such as Vikas Marg, Karaval Nagar, Shiv Vihar and Chand Bagh.

In 5 years, all houses in Delhi to get water 24×7, says CM Arvind Kejriwal | Delhi News – Times of India