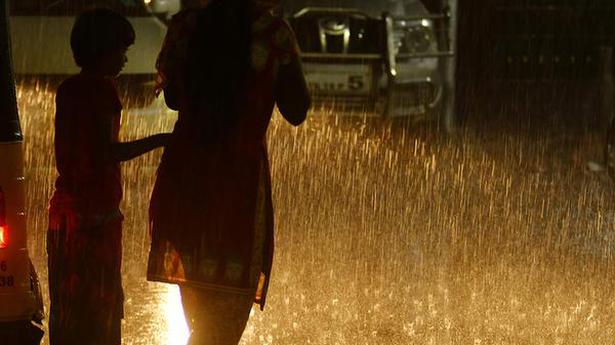 The northeast monsoon, which contributes the major share of annual rainfall in the region, is likely to set in over Tamil Nadu after October 25, according to the Meteorological Department.

Officials of the Meteorological Department said the southwest monsoon continued over the south Indian region due to La Niña conditions prevailing over the Pacific Ocean. Moreover, weather systems that are forming over the Bay of Bengal and moving north off south Indian coastal areas would also influence westerlies to prevail in the region, including Tamil Nadu, till October 22.

Earlier, the department had forecast that the prevailing global weather phenomenon would cause the northeast monsoon to bring below normal rain over southern Tamil Nadu and near normal rainfall over the northern parts.

The Meteorological Department also predicted light to moderate rain over some districts, including Vellore, Krishnagiri, Dindigul, Chennai, Kancheepuram, Coimbatore and Theni on Tuesday. The deep depression over Bay of Bengal which is likely to cross the north Andhra Pradesh coast close to Kakinada on Tuesday morning triggered rains over parts of Tamil Nadu, said officials.

On Monday evening, sharp showers lashed various parts of the city, including T. Nagar, Ennore, Meenambakkam, Vyasarpadi and Perambur. The weather stations in Nungambakkam and Meenambakkam recorded 2cm and 1cm of rainfall respectively till 7 p.m. The same weather trend is expected to continue in the city on Tuesday and light rains will occur in a few areas. The department warned fishermen not to venture into sea as strong winds, reaching speeds of up to 55 km per hour, were likely over the Comorin area and the Gulf of Munnar.