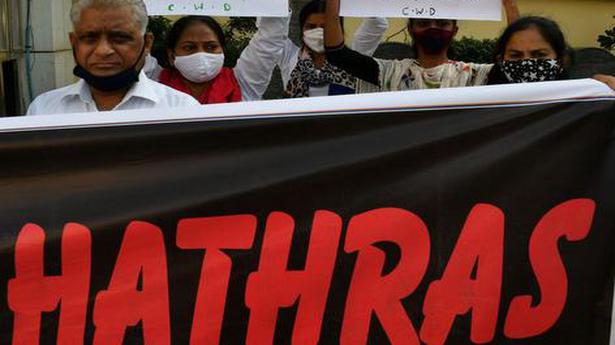 A select list of stories to read before you start your day.

The Central Bureau of Investigation is in the process of taking over the probe into the alleged gang rape and assault on a 19-year-old Dalit woman in Hathras on September 14, following a reference from the Uttar Pradesh government. The victim succumbed to her injuries at a hospital in Delhi on September 29.

U.S. President Donald Trump made his first public appearance since returning to the White House on Monday from a three-day stay in hospital for COVID-19, even as his aides remained silent on whether he is still contagious.

With the Army looking to strengthen troops in high altitude areas in Eastern Ladakh due to the ongoing standoff with China, the Vice-Chief of Army Lt. Gen. S.K. Saini on Saturday called for attaining self-reliance and reducing import of special clothing and mountaineering equipment.

The Congress on Saturday sent a list of 30 star campaigners to the Election Commission (EC) for the first phase of the Bihar Assembly polls. The list includes leaders who had questioned the party’s leadership through a letter in August.

The family members of Babu Lal Vaishnav, a 55-year-old temple priest, who was set on fire in Bukna village of Rajasthan’s Karauli district, performed his last rites on Saturday after the State government announced an ex-gratia assistance of ₹10 lakh to the next of kin.

Four militants, including a “commander”, were killed in two separate operations in south Kashmir on Saturday. Meanwhile, a major bid to smuggle weapons on the Line of Control (LoC) was foiled in north Kashmir’s Kupwara.

Continuing the series of its maritime engagements, the Navy is scheduled to hold another Passage Exercise (PASSEX) with a U.S. Navy aircraft carrier group on October 12, an official source said.

A full-blown political war broke out in Odisha after the Bhubaneswar Municipal Corporation has sealed the office of local MP and BJP national spokesperson Aparajita Sarangi on Saturday for her alleged disregard for coronavirus (COVID-19) protocols like wearing mask and maintaining social distancing.

Authorities in Kyrgyzstan on Saturday arrested a former President, banned rallies and imposed a curfew in the Central Asian nation’s capital, seeking to end a week of turmoil sparked by a disputed parliamentary election.

The Consortium of Indian Associations termed as a ‘big blow’ to micro, small and medium-sized enterprises (MSMEs) the RBI’s affidavit in the Supreme Court pleading for vacating its stay order on the classification of NPA and the Centre ruling out further relief measures under the loan moratorium scheme.

After seven matches, Chennai Super Kings’ mid-term report card will just read ‘lack of intent’. The side produced yet another dull display on Saturday, going down to Royal Challengers Bangalore by 37 runs at the Dubai International Stadium.

When two teams owned by Bollywood superstars clash, you know you are in for an entertaining evening. And Saturday was no different as Shah Rukh Khan witnessed some edge-of-the-seat action with his team, Kolkata Knight Riders, pulling off a narrow two-run win over the Preity Zinta co-owned Kings XI Punjab in an Indian Premier League clash.

How can police link money in Siddipet to the Dubbak bypoll: Revanth

Coronavirus | Children could be spreaders or super-spreaders of COVID-19, says ICMR