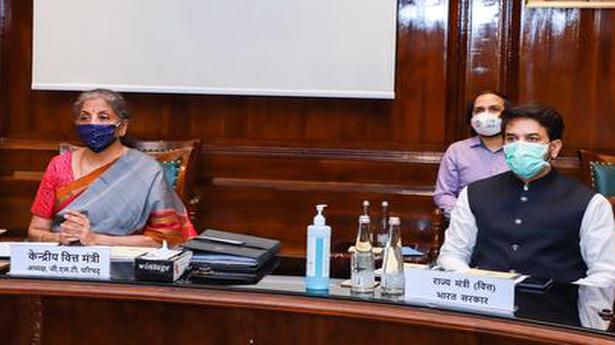 The Goods and Services Tax (GST) Council failed again on Monday to reach an agreement on the contentious issue of borrowings to meet shortfalls in cess collections used to recompense the States for revenue losses from the indirect tax implementation.

Just a week after his release from the hospital, President Donald Trump returned to the campaign trail Monday for the first time since contracting the coronavirus as he tries to stage a late comeback in the election’s final stretch.

India and the United States have been “too cautious”, when it comes to China’s concerns about their strategic ties, said a senior U.S. official, who called China the “Elephant in the room” during bilateral talks.

India and China held the 7th round of Corps Commander talks at Chushul on Monday in an effort to work out a schedule for disengagement and de-escalation along the disputed border in Eastern Ladakh. The talks were still on at the time of going to print. These are the first senior military-level talks following Beijing’s comments that it has “not recognised” the Union Territory (UT) of Ladakh.

The Supreme Court asked the Centre to respond to petitions describing the passage of the controversial new agricultural laws by Parliament as the beginning of an anti-farmer “exploitative regime”.

“It felt like a tetanus shot,” said Joel Joy, 32, who works for a multinational firm in Mumbai, and was among those who’d volunteered for the experimental Covishield vaccine, being tested by the Pune-based Serum Institute of India (SII) at various hospitals in India, “I’ll be going to the gym later today,” he added.

India on Monday welcomed the release of seven nationals who had been abducted in September by fighters in war-torn Libya. The Ministry of External Affairs acknowledged the support that the authorities in Tripoli have extended in ensuring the release of the seven persons belonging to Andhra Pradesh, Bihar, Gujarat and Uttar Pradesh.

Nine women lawyers have approached the Supreme Court against a Madhya Pradesh High Court order which directed a man accused of sexual assault to visit his victim at home on Rakshabandhan and “allow” her to tie a rakhi on him as a condition of bail.

The Supreme Court on Monday asked the government to respond to a plea to provide equal protection in law against sexual abuse for transgender persons. The petition filed by advocate Reepak Kansal said there was no penal provision which protected them from sex crimes.

Bangladesh introduced the death penalty for rape on Monday after days of protests sparked by a string of sexual assaults, the government said.

Four Bollywood industry associations and 34 leading producers have moved the Delhi High Court seeking to restrain Republic TV, Times Now, and other social media platforms from publishing irresponsible and defamatory remarks against Bollywood as a whole.

When A.B. de Villiers finds form, there is not much the bowlers can do, as Kolkata Knight Riders found out at the Sharjah Cricket Stadium on Monday. The blistering 73 not out off just 33 balls (5×4, 6×6) from the South African genius powered Royal Challengers Bangalore to an 82-run victory.