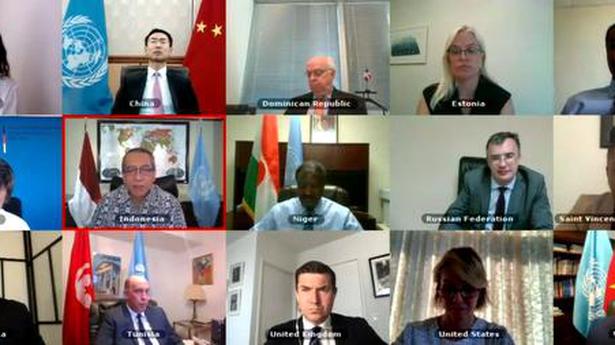 “What is wrong in seeking an apology? Is it a sin to apologise? Will that be a reflection of guilt? ‘Apology’ is a magical word which can heal. You will all go to the category of Mahatma Gandhi if you can apologise” Justice Arun Mishra asked on Tuesday.

The note will also include the fact that Pakistan’s U.N. Permanent Representative Munir Akram claimed to have addressed a UNSC debate on terrorism held on Monday, which was open only for Ambassadors of the 15 Security Council members, which don’t include Pakistan.

More than a year after the Pulwama terror attack in which 40 CRPF personnel were killed by a car-borne suicide bomber, the National Investigation Agency (NIA) on August 25 filed a charge sheet comprising more than 13,000 pages in a Jammu court.

At least 12 people died and several others were injured after a five-storey building collapsed on Monday evening in Raigad district of Maharashtra. At least six people are still feared trapped in the rubble. The incident took place in the Kajalpura area of Mahad tehsil around 6.45 p.m.

“As of now the exam dates stand as it is. But the letters by Chief Ministers and other political leaders cannot be ignored,” the Home Ministry official said on background. “As far as I know, there is no rethink,” Higher Education Secretary Amit Khare told The Hindu.

The latest meeting the Congress party’s working committee ended with another thumbs-up for the Gandhi family with Sonia Gandhi continuing on as interim president. This is despite 23 senior party leaders writing to Sonia Gandhi stating that the party needs overhauling from top to bottom and that there should be a new leadership which can be more visible on the ground. The party’s dynasty dilemma looks no closer to being resolved but can any meaningful change come from this latest episode?

“High frequency indicators that have arrived so far point to a retrenchment in activity that is unprecedented in history,” the RBI said in its Annual Report for 2019-20, released on Tuesday.

China’s Minister of Industry and Information Technology Xiao Yaqing “urged fellow nations, including India, to boost cooperation in areas including 5G and AI”, Chinese media reported, adding that China was “actively considering the establishment of a BRICS innovation base in China.”

The coronavirus pandemic, which has left more than 178,000 people dead in the United States, millions unemployed and dented Mr. Trump’s re-election hopes, was largely ignored although Don Jr claimed there is “light at the end of the tunnel.”

The club source said Messi, who has spent his entire career at Barca, informed the club about his desire to leave by sending a burofax, a service used in Spain to urgently dispatch a document that requires proof to third parties.

Despite all eight teams having arrived in the United Arab Emirates for the IPL, to be played in Dubai, Sharjah and Abu Dhabi from September 19 to November 10, the schedule is yet to be made public.