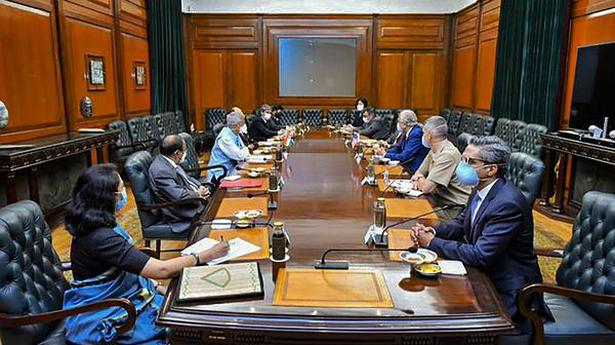 “We have been able to revive grassroots democracy and provide a new momentum to social and economic development, despite the challenge posed by COVID-19 pandemic and persistent attempts by one country to infiltrate terrorists to derail this process,” said Permanent Representative in Geneva,  Indra Mani Pandey said.

The Union Health Ministry on Tuesday said there was no shortage of oxygen supply for medical use in the country, adding that there was surplus production.

India on Tuesday responded strongly after Pakistan displayed the newly unveiled political map of the country during the meeting of the National Security Advisers of the member countries of the Shanghai Cooperation Organisation (SCO). National Security Adviser Ajit Doval, who was participating in the virtual interaction, left the meeting mid-way after Pakistan displayed the map prominently behind its delegation.

At a meeting of Business Advisory Committee (BAC) of the Lok Sabha where floor leaders of all political parties meet, the Congress raised the demand for a discussion on the India-China issue.

Antique bronze idols of Rama, Sita and Lakshmana, which were reportedly stolen from Nagapattinam in the 1970s, are set to return home due to efforts taken by art enthusiasts, officers of Idol Wing CID, and the High Commission of India (HCI), London.

Actor Kangana Ranaut amended her petition before the Bombay High Court on Tuesday and sought ₹2 crore as compensation from the Brihanmumbai Municipal Corporation (BMC) for the demolition of her bungalow in Bandra.

The United Arab Emirates and Bahrain on Tuesday will become the latest Arab states to break a longstanding taboo when they sign agreements toward normalising relations with Israel in a strategic realignment of West Asian countries against Iran.

In the wake of Hindi film actor Sushant Singh Rajput’s suicide and subsequent arrest of his girlfriend Rhea Chakraborty over involvement in an alleged drug racket, which has dominated news channels over the past many weeks now, Samajwadi Party MP Jaya Bachchan said that the film industry was being “flogged” to “divert attention” from the depressing financial situation.

Forecasts of heavy rains across key central and western growing regions have stoked fears of potential crop losses in the second half of September, industry officials said.

The Central Vigilance Commission (CVC) has advised the Ministry of Railways to drop action against top officials of the Integral Coach Factory (ICF), Chennai, who were part of the core team that made Vande Bharat Express, India’s first semi-high speed train.

Chief Minister Edappadi K. Palaniswami asserted in the State Legislative Assembly on Tuesday that the Tamil Nadu government would not allow Karnataka to construct a dam across the Cauvery at Mekedatu in any way.

With several match-winning options to choose from, Punjab needs to ace the balance of the starting eleven if it has to progress to the playoffs and beyond.

How can police link money in Siddipet to the Dubbak bypoll: Revanth

Coronavirus | Children could be spreaders or super-spreaders of COVID-19, says ICMR