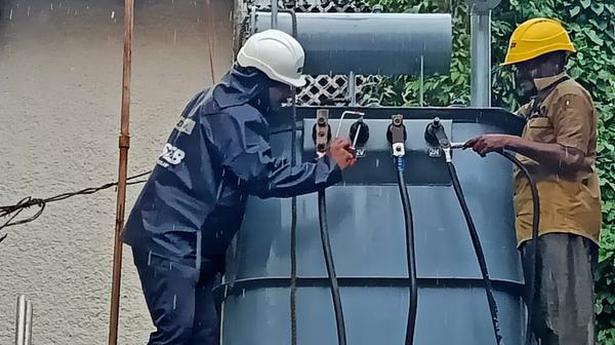 The song ‘A Salute to KSEB Workers’ acknowledges these frontline workers in the face of the twin crises of relentless rains and Covid-19.


As about 23,0000 field staff from the Kerala State Electricity Board (KSEB) have spanned out into the hills and plains of Kerala after a week of epic rains to restore broken electric poles, overhaul inundated transformers and check the last-mile connectivity to thousands of homes, a musical tribute to their endurance and resilience has garnered about 40,000 views on the Internet after its launch this week.

The song ‘A Salute to KSEB Workers’ acknowledges these frontline workers in the face of natural calamities and as Covid 19 pandemic continues to travel the world testing our determination.

“Two of our colleagues died last week in the line of duty; one died in a treefall and another of electric shock”, said an employee, highlighting the risks involved in their unceasing efforts to keep power supply uninterrupted as the State faced the twin crises of Covid-19 and relentless rains.

The five-minute Malayalam song and accompanying visuals are a tribute to the KSEB worker who hits the ground running in sunshine and rain. The lyrics describe the circumstances that led to the creation of the video and the visuals bring home the types of work they engage in and the dangers they expose themselves to.

Shaiju Kelanthara, who wrote the lyrics said that he had served the Board for about three decades and had always wanted to acknowledge the work done by the field staff. The lyrics were set to music by Johnson Mangazha. Jethu and Urumese, both KSEB workers and a former employee Shaji Jose are the singers.

A KSEB official said that the Board centre in Thiruvananthapuram receives between 2,500 and 3,000 calls a day raising different types of complaints. There are also thousands of complaints received by the section offices spread over the State, he said. Addressing these grievances involve the army of field workers, who form the backbone of power supply and maintenance in the state.

The official said that repair works after the week-long bout of heavy rains had been launched now in right earnest with control rooms being opened across all the 25 circles in the State. Each circle has about four to five lakh customers, whose complaints are now being attended to by the Emergency Response Teams in addition to the normal arrangements for attending to complaints.