Home News National National Education Policy | Why has language been a sensitive matter? 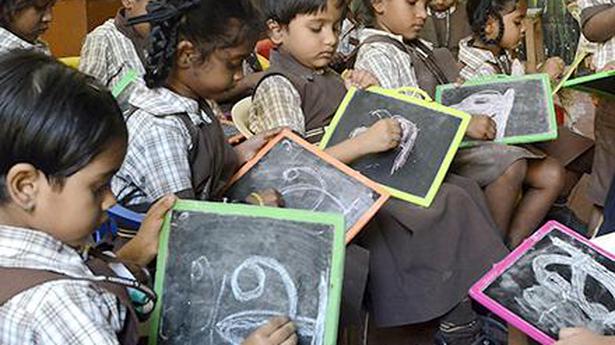 Chief Minister Edappadi K. Palaniswami’s reiteration that the State government would stick to the two-language formula is expected to bring to an end the raging controversy over the National Education Policy but a perusal of the State’s history reveals that the language question has always been a sensitive subject.

The Chief Minister’s observation has come in the context of the public discourse that the policy would facilitate “indirect entry” of Hindi or Sanskrit as a third language into the State. The argument of proponents of the two-language formula centres around two points — the possibility of the importance of Tamil, which has the oldest literature among living languages, getting diminished and the absence of the need for learning a third language as English serves very well the purpose of communication with the world.

The State’s political journey on the issue of language can be traced to the decision of the Congress regime, led by C. Rajagopalachari or Rajaji, to make Hindi a compulsory subject in the first, second and third forms (equivalent to the present standards VI to VIII), in August 1937. However, the decision was met with agitations spearheaded by E.V. Ramasamy. But there was no change in the policy till the Congress Ministry remained in office till October 1939. Four months later, the British government made Hindi optional.

During the 1950s, the language issue continued to be a major subject of discussion, both in the Assembly and outside. The flashpoint was the eruption of the “anti-Hindi” agitation in January 1965, in the light of the proposed move to make Hindi the sole official language. Though college students, cutting across sections of society, had taken part in the agitation, it became one of the reasons for the DMK to capture power for the first time in the State two years later. By this time, Rajaji had become a critic of “imposition” of Hindi. In deference to the sentiments of the people, the Centre decided that English would remain an associate official language.

It was left to the DMK government, led by C. N. Annadurai, to do away with the three-language formula and adopt the two language formula – teaching Tamil and English in government schools. To this day, the two-language formula has been the policy of the State government, regardless of the party in power. Even though the frequency of stirs by political parties against the “Hindi imposition” have considerably gone down in nearly 20 years, the BJP’s return to power at the Centre in 2014 revived in a big way the public discourse on the language issue.

Durai Murugan, senior leader of the DMK, says, “The genuine apprehension amongst us is that attempts of the Central government would eventually lead to extinction of the Tamil language.” His colleague and former School Education Minister Thangam Thennarasu feels that the history of opposition to the three-language formula only demonstrates “strong concerns” of the people over the Central government’s approach that steps were on to effect “clandestine introduction of Hindi or Sanskrit,” the knowledge of which will be a “burden” on students of the State.

A senior leader of the AIADMK, speaking on the condition of anonymity, says that the State’s stand should not be viewed as a mark of blind resistance but as one that is aimed at defending the State’s autonomy. Besides, the priority of the Union government should have been to address the “pressing and chronic” economic issues that are affecting the country. What the two principal parties indicate is that the two-language formula will remain a permanent feature of the education policy in the State government, no matter which party is in power.

30% of Covid-19 patients in Delhi hospitals from other states: Satyendar...