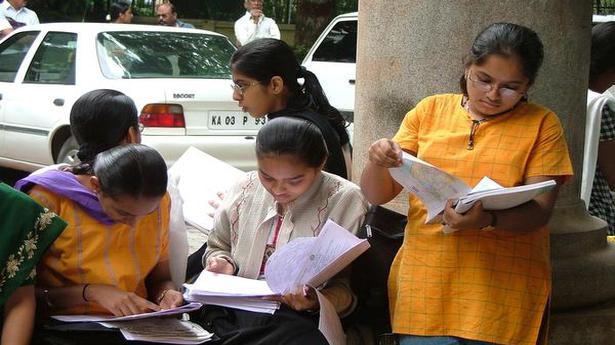 But Education Ministry holds firm on conduct of exams next month.


Facing escalating demands from political leaders and student organisations to push back JEE-NEET exams due to COVID-19 fears, a Home Ministry official indicated that reconsideration was on the cards. However, his Education Ministry colleague denied a rethink was underway.

“As of now the exam dates stand as it is. But the letters by Chief Ministers and other political leaders cannot be ignored,” the Home Ministry official said on background.

“As far as I know, there is no rethink,” Higher Education Secretary Amit Khare told The Hindu.

Anxious students opposed to holding the examinations under the current circumstances have not only received support from political parties, but also from global youth icon and climate activist Greta Thunberg.

“It’s deeply unfair that students of India are asked to sit national exams during the COVID-19 pandemic and while millions have also been impacted by the extreme floods. I stand with their call to #PostponeJEE_NEETinCOVID,” Ms. Thunberg tweeted on Tuesday.

A senior government official said the Home Ministry gave a green signal to conduct the exams on the insistence of the Education Ministry. The official said no decision had been taken to reschedule the exams, but letters by several political leaders were being studied.

The Home Ministry’s clearance is required after the Disaster Management Act, 2005 was invoked for the first time in the country in wake of the COVID-19 pandemic in March.

On Tuesday, Odisha Chief minister Naveen Patnaik wrote to Education Minister Ramesh Pokhriyal Nishank to postpone the JEE (Main) and NEET examination scheduled to be held in the first fortnight of September to ensure the safety and security of the students.

He said in view of the prevailing pandemic situation in the country, it would be “highly unsafe and perilous for the students to visit the test centres physically.” He added that as a result of frequent localised lockdowns in districts due to sudden increase in number of cases, “the local transportation too gets disrupted.”

West Bengal Chief Minister Mamata Banerjee also wrote a letter — her second in two days — to Prime Minister Narendra Modi, calling for a postponement of the exams to protect the students from grave health risk. She requested the Prime Minister to appeal the Supreme Court to review its verdict to hold the exams in September.

“Today our Government has received a letter from the National Testing Agency for conducting the JEE/NEET examinations from 1st September, 2020. We are really worried and concerned,” she said.

DMK president M.K. Stalin flagged the flood-situation in many parts of the country, adding that the allotted exam centres are not uniformly accessible to all students due to restrictions on public transport.

On August 23, AIMIM Member of Parliament from Hyderabad Asaduddin Owaisi tweeted, “I hope better sense prevails & #JEENEET is postponed. But my advice to students would be that they be prepared for the worst.”

In poll-bound Bihar that has been worst affected by floods, the main Opposition party, Rahstriya Janta Dal (RJD) also demanded that the exams be postponed.

“For the sake of lakhs of students across India and thousands of flood affected students of Bihar, CM @NitishKumar must talk to Central Govt to #POSTPONEJEE_NEET ! Students are precious! They shouldn’t be exposed to Covid Pandemic!” the RJD tweeted.

Last week, the Supreme Court dismissed a plea by 11 students from 11 States to postpone the examinations in the light of the spread of COVID-19.

“In our opinion, though there is pandemic situation, but ultimately life has to go and the career of the students cannot be put on peril for long and full academic year cannot be wasted,” said the apex court, adding that “the examination is going to be held with due precaution and it is not going to be postponed.”

Following the August 18 order, the National Testing Agency (NTA), an autonomous body under the Education Ministry, which has been charged with the task of actually conducting both examinations, released admit cards and issued detailed guidelines for safe conduct of the examinations. Arrangements have been made to sanitise venues, test temperature of candidates, set up separate isolation rooms for students with fever, and six-foot gaps both in seating and entrance and exit procedures. All students will be provided with masks at the venue.

The Agency’s data shows that almost 16 lakh students have registered for the National Eligibility-cum-Entrance Test (NEET), a prerequisite for admission to undergraduate medical and dental programmes across the country. It is a written, pen and paper examination.

More than 8.5 lakh students have registered for the Joint Entrance Examination-Main (JEE-Main), down a lakh from the 9.6 lakh who had registered last year. It is a fully online examination. The JEE Main is used for admission to the National Institutes of Technology and other central engineering universities, as well as a number of State and private engineering institutions. Top rankers will also then be eligible to attempt JEE Advanced, for admission to the elite Indian Institutes of Technology.