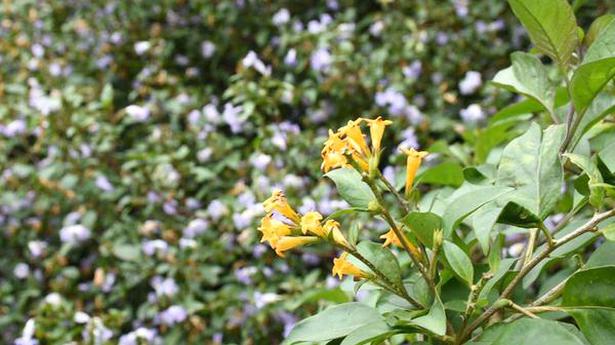 Iconic flora native to the Nilgiris, including more than 30 species of Strobilanthes, could be under threat of being displaced with the continuing advance of invasive flora such as Cestrum aurantiacum and Lantana camara, experts warn.

V. Ramsundar, a horticulturalist working for the Horticulture Department in the Nilgiris, said the spread of exotic weeds and invasive species into habitats that until recently were populated only by native species could prove disastrous for the Nilgiris’ biodiversity. “It is well known that invasive species can smother and out-compete native plants, leading to their localised disappearance from a landscape,” Mr. Ramsundar said.

His concerns were mirrored by Pradeep A.K., a naturalist who has documented 19 species of Strobilanthes in the Nilgiris. Mr. Pradeep said invasive weeds posed a serious threat to the native flora. “Of the different species of Strobilanthes seen in the Nilgiris, each needs a specific micro-climate to survive and thrive. Any disturbance to their habitat could lead to their numbers diminishing and disappearing entirely from the landscape,” he said. Invasive species of plants were also posing a serious threat to the Strobilanthes species in Kodaikanal, he said.

“If we look at records, we can see that in the 19th century, the Strobilanthes plants were recorded in places in the Nilgiris where they have been completely wiped out. In order to protect the remaining habitats, the areas where the plants are located should be identified and invasive plants should be removed immediately,” said Mr. Pradeep.

Dr. Tarun Chhabra, an expert in the local ecology of the Nilgiris, said there is a need for a study of the native flora and the threats they face. “That’s why I think the Western Ghats Plants Specialist Group (WGPSG), set up by the International Union for the Conservation of Nature (IUCN), can help ascertain the threats faced by the Nilgiris flora,” said Mr. Chhabra, a member of the WGPSG.

“There are certain wild Impatiens (balsams) species endemic to the Nilgiris and the Western Ghats that are found only in a few square kilometers in a particular valley, and are critically endangered,” said Mr. Chhabra, highlighting the rarity of certain endemic plant species in the Nilgiris.

Mr. Chhabra said better research and understanding of the Nilgiris’ native plants, as well as the landscape in which they are found and the threats they face, can help formulate more effective conservation strategies.

5 killed, 34 injured after bus falls into gorge in Maharashtra