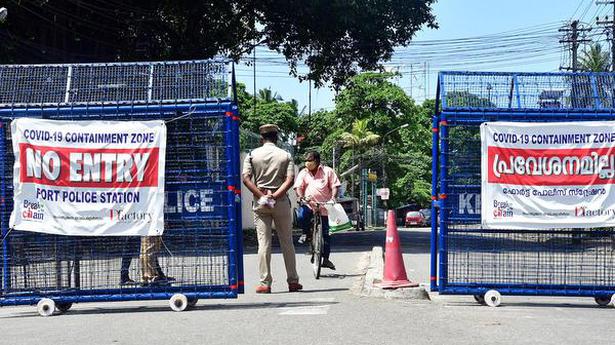 Nine people, including a 50-year-old woman and an Army officer who came from Jammu and Kashmir, tested positive for SARS-CoV-2 in the district on Sunday.

The rest seven came from abroad during the last few weeks.

The woman who tested positive is the wife of the Puthenpalam native and retired employee of Liquid Propulsion Systems Centre (LPSC) who was diagnosed with the disease a few days ago. She had figured in the primary contact list of her husband and is known to have visited multi-brand shopping complexes in Chakka and East Fort between June 14 and 20. She also underwent treatment at a private hospital near Chakka.

The Army officer is a 32-year-old from Dalumugham who reached New Delhi from Jammu and Kashmir on June 20 and travelled on a flight to Thiruvananthapuram on the same day.

Picked up by his brother from the airport, the soldier reached his native place after dropping a colleague who tested positive on Saturday.

The others who tested positive include a 43-year-old Kilimanoor native and a 52-year-old Kallambalam native both of whom came from Dammam on June 26 and 20 respectively, a 63-year-old Pallipuram native who returned from Muscat on June 25, a 26-year-old Powdikonam native and 60-year-old Neyyattinkara native who came from Oman on June 25, a 39-year-old Nedumangad native who came from Saudi Arabia via Kochi on June 22, and a 37-year-old Vallakadavu native who also came from Saudi Arabia on June 20. Meanwhile, the City police booked a Nagercoil native for violating home quarantine in Elamkom lane in Kannettumukku under the Museum police station limits. With this, the number of people who are facing legal action in the city for the offence has gone upto 15.

Two Kannur natives were also booked by the police for entering the Attukal ward, which has been designated as containment zone, without authorisation. The Fort police have registered a case against themunder the Kerala Epidemic Diseases Ordinance 2020.

Eighty one people were charged by the City police for violating lockdown norms. As many as 163 people were also fined for failure to wear masks. The police have also intensified patrolling as part of enforcing night curfew between 9 p.m. and 5 a.m.