Home Cities Hyderabad No dignity in death for COVID-19 warrior 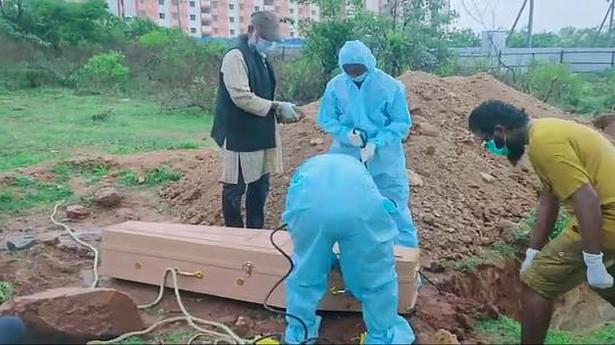 Fifty-eight-year-old Victoria Jayamani, the head nurse of Government Chest Hospital, who became the first among the nursing staff to succumb to COVID-19 after selfless service on June 26, could not get the dignity that is reserved for a deceased person.

While officials and the government recalled her services and assured all help to the family, the near and dear ones of the senior nurse are aghast that they could not provide a decent burial for her. She is not alone in suffering even in death. Families of eight other COVID-19 deceased patients from the Christian community too underwent similar ordeal in getting place for burial.

Even as the body of Jayamani was lying in Gandhi Hospital mortuary, her family members ran from pillar to post to secure a 6 x 8-foot piece of land for burial. The popular church they attend every Sunday was of no help once it became clear that the deceased was a COVID-19 victim. The cemetery at Narayanguda failed to allow the burial. Several other mainline churches with cemeteries attached to them too refused permission.

B. Jakinkanth, son-in-law of the head nurse, said they knocked at the doors of everyone including officials and politicians, but no help came their way. “My mother-in-law gave everything in serving the needy patients and at the end, she was not given the due respect that is reserved for the dead,” he recalled.

After much running around, the family members found government-sanctioned burial ground for the Christians at Ahmedguda in Keesara mandal, 20 km from the city.

“Even this piece of land did not come free of cost. The family had to pay ₹ 20,000 to conduct the last rites,” those who arranged the last rites on June 27 said.

Information gathered from different sources revealed that at least three deceased patients’ bodies were kept in private hospitals for three to four days till place was identified for the burial. If the bodies were in Gandhi Hospital there was pressure to take them for burial immediately. Deceased patients residing in Moulali, Neredmet, Musheerabad, Sanatnagar and Malkajgiri were taken to city outskirts for final rites.

Goneh Solomon Raj, Secretary of Christian Burial Grounds for Greater Hyderabad, told The Hindu that since the outbreak of the pandemic nine Christian patients had died of COVID-19. “All the nine families underwent untold misery in performing the last rites,” he said. According to him, of the nine, three were buried at Dommarapochampally village in Dundigul mandal in a place allotted besides a dump yard for Christian burial ground, but after lot of protests by the locals. Two others were buried at Ahmedguda village in Keesara village. Four others were cremated in Hindu crematoriums in the city.

Bishop of Church of South India Medak Diocese Reverend A.C. Solomon Raj said that there was no bar on burying the COVID-19 deceased if they belong to the CSI background. “So far we have not got a request for burial of any COVID-19 victim but will surely allow last rites to be performed as per Christian customs,” he said.

Vicar General of Archdiocese of Hyderabad Reverend Swarna Bernard too echoed similar sentiments saying that they had systems in place to perform the last rites of any Catholic member whether he/she dies of any ailment including coronavirus.

When queried about the denial of permission for burials in cemeteries in the Twin Cities, Kanthi Wesley, Managing Director, Telangana State Christian Minority Finance Corporation, the nodal agency overlooking welfare of the Christians in the State, said they are coordinating with the churches to allow burial for COVID-19 deceased too. Big cemeteries in the Twin Cities lack space so the government had allotted 40 acres for new Christian burial grounds in and around the city, she said.