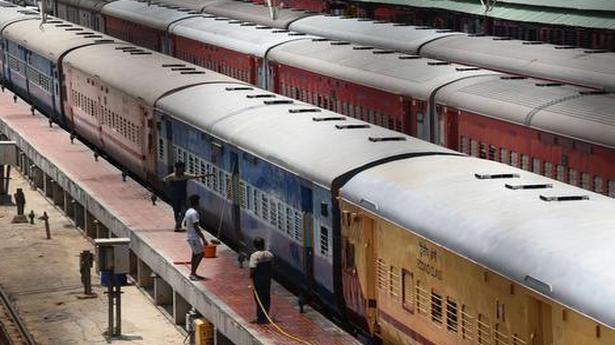 Currently on most routes, speeds of mail/express trains have a ceiling of 110 kilometres per hour or lower.

Trains running on identified routes at a speed of 130 kilometres per hour or above on the railway network will have only air-conditioned coaches in the near future as part of the Railways’ plans to upgrade the network, an official said on Sunday.

Stressing that the ticket prices of such trains will be affordable, railway ministry spokesperson D.J. Narain clarified that it should not be misconstrued that all non-AC coaches will be made into AC coaches.

Currently on most routes, speeds of mail/express trains have a ceiling of 110 kilometres per hour or lower.

AC coaches have become a technical necessity wherever the speed of the train is going to be above 130 kilometres per hour . Indian Railways is working on a massive plan to upgrade the railway network to high speed potential,” Mr. Narain said.

Non-AC coaches will continue to run in trains running at 110 kilometres per hour,” he said.

“It will be ensured that while the price of tickets of modified AC coaches remains very affordable for the passengers, the comfort and conveniences increase manifold and there is substantial reduction in travel time, Mr. Narain said.

He said that a prototype of such an AC coach is being manufactured at Rail Coach Factory at Kapurthala and should be ready in a few weeks.

Presently, an 83-berth coach is being designed. It is planned to have 100 such coaches this year and 200 next year. The coaches will be evaluated and experience gained from the running of these coaches will lead to further progress, he said. Officials said that the new AC coaches will be economical as their tickets will be priced between AC 3 and Sleeper coaches.

Compared to 72 berths in a sleeper coach, this new AC coach will have 83 berths, but the number of berths in a coupe will remain the same. However, there will be no extra middle berth between side-upper and side-lower berths.

The coaches are being re-designed by moving the electrical units and removing the space reserved for storing blankets and bed sheets, since Railways will stop providing them due to coronavirus.