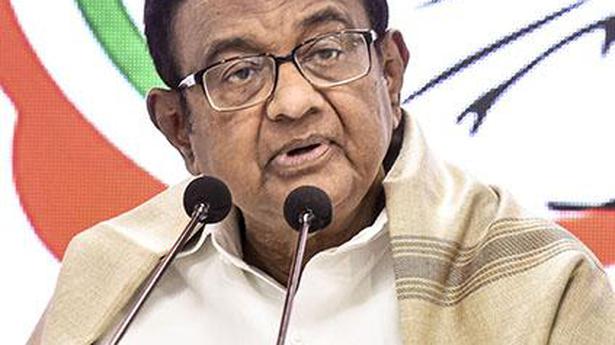 
The CBI told the Bombay High Court on Monday that it was conducting a preliminary enquiry into a complaint filed against former Union Finance Minister P. Chidambaram and two other bureaucrats for allegedly misusing power in the National Spot Exchange Limited (NSEL) scam.

A Division Bench of Justices Sadhana Jadhav and NJ Jamadar was hearing a criminal petition filed by 63 moons technologies limited, also known as Financial Technologies Indian Limited. The company was founded by industrialist Jignesh Shah, who was also the company’s former chairman. He was arrested on July 12 in connection with the ₹5,600-crore NSEL scam. Over 13,000 investors have allegedly lost money due to alleged malpractices by the directors and promoters of NSEL.

CBI counsel Hiten Venegavkar informed the court that Mr. Shah’s statement had been recorded and that there were documents that dated back to the year 2012-2013 and so the agency required time to verify them. He also said the CBI had not received any further evidence or documents from the company.

To this, senior advocate Aabad Ponda, representing 63 moons technologies, said all relevant documents had been submitted to the CBI. He argued, “A preliminary enquiry, as per provisions of the Prevention of Corruption Act, has to be completed within a period of four months. In this case, the preliminary enquiry was initiated in February.”

The plea pertains to the delay by the CBI in investigating Mr. Chidambaram, who was the then Union Finance Minister; and bureaucrats K.P. Krishnan, who was the Additional Secretary and Joint Secretary in the Ministry of Finance; and Ramesh Abhishek, who was the chairman of the Forward Markets Commission during the scam.

In August 2019, the CBI informed the court that after verification of the complaint, a preliminary enquiry would be initiated.

The petition mentioned that in March 2020, the company representatives were summoned by the CBI to record their statement as the preliminary enquiry was initiated.

The court directed the CBI to file an affidavit stating all the details of their enquiry and adjourned the matter to August 13.