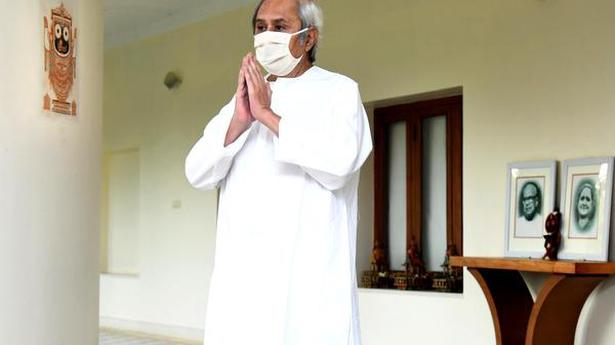 Millions of people of Odisha joined Chief Minister Naveen Patnaik in reciting the patriotic song, Bande Utkala Janani, on Saturday to honour the sacrifice of COVID warriors working tirelessly to keep the State safe from the pandemic.

Maintaining social distancing, people belonging to all sections sang the song across the State at 5.30 p.m., responding to Mr. Patnaik’s call.

In a video message on Thursday, Mr. Patnaik urged the Odia people to sing Bande Utkala Janani to inspire the COVID warriors as the State’s mortality rate was one of the lowest in the world and more than 50% of the infected people had recovered and gone home.

While Mr. Patnaik stood outside his home and sang the song, government employees, police personnel, sportspersons and others came out of their offices and homes with great enthusiasm.

All political parties, including the Opposition Congress and Bharatiya Janata Party, organised programmes at which their leaders and workers sang the song.

While 73 patients recovered, taking the number to 1,050 on Saturday, 96 positive cases emerged, pushing the total to 1,819. The number of active cases stood at 760. Nine deaths have been recorded so far – seven due to COVID-19 and two due to other ailments, the Health Department said.

Soon after the song was sung, social media platforms were flooded with photographs and videos of Odia people all over the country and abroad reciting the song.

Union Minister Dharmendra Pradhan posted a video on Twitter, showing himself singing the song with his family members. The Chief Minister responded soon, thanking Mr. Pradhan for standing in solidarity with COVID warriors. Mr. Patnaik also shared the posts of other leaders and people on different social media platforms.

Bande Utkala Janani, penned by Kantakabi Laxmikanta Mohapatra, describes Odisha’s splendid natural beauty and cultural heritage. The song came into prominence during the freedom struggle when the Odia people fought a separate State, which was created on April 1, 1936.