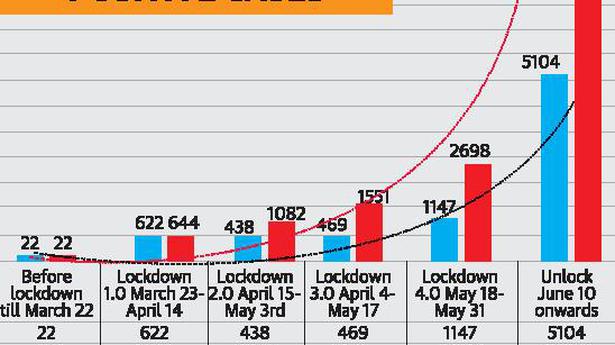 Around 27 Post Graduate students at Osmania General Hospital, who play a crucial role in attending to COVID-patients, boycotted emergency and elective duties on Sunday too.

General Medicine junior doctors said that they would not attend to duties until PGs from other clinical departments treat COVID suspects admitted at the hospital.

Stating that they were overstretched and not able to provide even basic treatment to patients admitted in critical stages, they boycotted the duties from Saturday morning. Apart from dearth of required work force, they have alleged that infrastructure such as oxygen ports were insufficient leading to loss of lives.

However, hospital superintendent B. Nagender denied the allegations. “COVID suspects in terminal stages are brought to OGH, sometimes even from private hospitals. Some of them have co-morbidities. There will be little time left to save them,” Dr. Nagender said as a reason for the deaths, adding that the natural course of the disease too was a factor.

Currently, COVID duties are distributed among 14 General Medicine faculty members, and around three are on duty at a time.

There is a dire need to address this crisis at the earliest as COVID suspects in critical conditions are admitted at the State government tertiary care hospital. Patients with Severe Acute Respiratory Infection (SARI) too are admitted here. On Sunday, there were around 50 patients. But there are only around 20 oxygen ports. And most of the patients need oxygen supply, sources in the hospital said.

The hospital administration said that there were 24 oxygen ports in the isolation ward and 10 more would be added by Monday morning.

“We already have around 30 oxygen cylinders and procuring 100 more,” Dr. Nagender said. Regarding additional workforce, he said they had allotted 30 house surgeons, and PGs from the anatomy and pathology departments. “A few more PGs from dermatology and orthopaedics, and one more Duty Medical Officer are given duties,” he said.

For one shift in the isolation ward, six PGs, 10 House Surgeons, and one Duty Medical Officer are needed. “Work will be properly distributed if PGs from other departments too are allotted duties,” a General Medicine junior doctor said.

As a result, doctors from all departments in OGH are full of cases to handle. They too have to attend non-COVID cases, officials said.