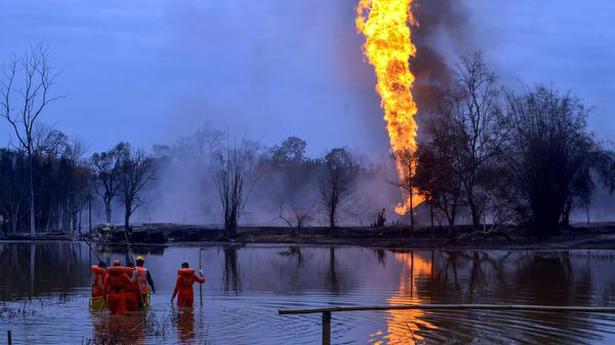 The capping was done by placing a blowout preventer on the well head. This happened after two failed attempts on July 31 and August 10.

“The well is capped but yet to be controlled. Capping in itself is a huge success and it will help kill the well to stop the outflow of gas and the fire,” spokesperson Tridiv Hazazira said from OIL’s headquarters in Duliajan.

The well had burst into flames on June 9, almost a fortnight after it underwent the blowout on May 27. The disaster affected more than 1,500 families living in the vicinity besides endangering wetlands and the Dibru-Saikhowa National Park close by, government and private agencies engaged in studying the impact said in their reports.

OIL officials hope to be over with the ‘killing’ of the well soon. This entails injecting the killing fluid – a viscous cement mud – through the inlet of the blowout preventer at very high pressure to a depth of 3.5 km. The injection is expected to take up to 10 hours.

The killing fluid is expected to plug subterranean perforations and block the upward movement of natural gas and associated condensates.

OIL had flown in three disaster control experts from Singapore before the Baghjan well caught fire. Two more experts from the U.S. and one from Canada were brought later.

Three of these experts sustained minor burn injuries while trying to cap the well in July.

National camp for women wrestlers to begin on October 10 |...