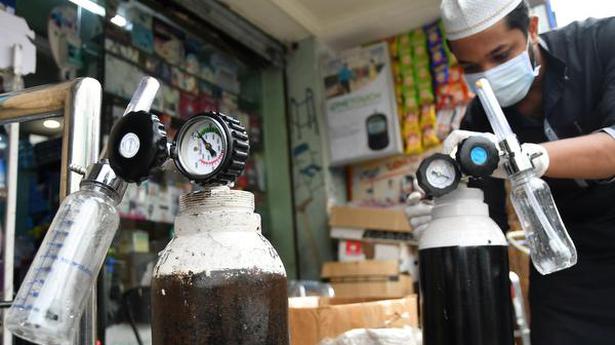 Cracking the whip on illegal sale of oxygen cylinders, a team of Hyderabad Commissioner’s Task Force (North zone) on Sunday apprehended a 36-year-old man from Musheerabad and seized 19 illegally procured cylinders from his possession.

According to Inspector Rao, the accused was operating an industrial and medical equipment business and decided to cash in on the COVID situation. “With many people suffering due to non-availability of oxygen cylinders in hospitals, Shaik decided to sell them at a high price in the grey market to earn some money,” the officer said.

The investigators also found that the accused was selling oxygen cylinders at a very high price to COVID-19 patients under home quarantine. “A few days ago, he illegally procured a huge quantity of oxygen cylinders from Sardar Khan of Baba Gas Agency in Nacharam,” Mr. Rao said, adding that the accused along with the seized property was handed over to Musheerabad police for further investigation.