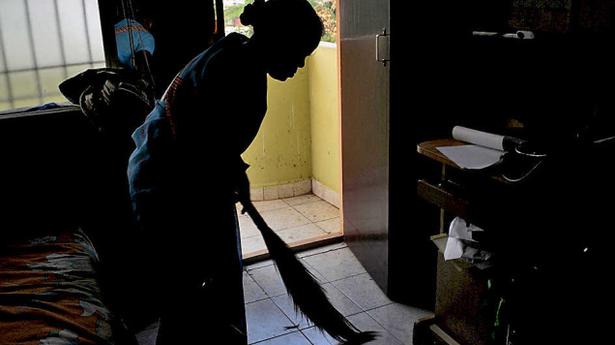 As many as 35,022 domestic and daily wage workers in the city have been tested randomly for COVID-19 so far and only 597 of them have been found to be infected — a rate of 1.7% — according to the Delhi government data accessed by The Hindu. Officials say the positivity rate is “low” and a “good sign”.

The Aam Aadmi Party government had on July 8 released a ‘Revised Delhi COVID Response Plan (Modified)’ under which drivers, domestic workers, plumbers, electricians, carpenters, mechanics among others were enlisted under special surveillance group(SSG) and tested.

Another group enlisted under the plan were people above 65 years of age and with comorbidities, termed as high-risk group (HRG), and they showed a higher rate of infection. Of the 12,457 elderly people tested for the virus, 525 were found COVID-19-positive, a rate of 4.2%, till July 29.

“Districts shall strive to undertake the screening of SSG wherever possible. Major points of conglomerations of SSG in the districts to be compulsorily covered,” the plan said.

“These workers interact with a larger number of people on a daily basis and if someone like them tests positive then the infection can spread. This was our idea behind putting them under a special group and testing them,” a health department official said.

“Their low positivity shows that we are well placed in terms of our fight against the virus.” The district officials have so far organised camps in markets and other areas and people falling under SSG have been tested using rapid antigen tests.

Commenting on the slightly higher positivity of senior citizens, the official said, “These people are more prone to get infections. So, considering that, it is also not a very high percentage.”

The average positivity rate in Delhi during July was 7.8%. But the official said that this cannot be compared with the positivity rate of SSG or HRG, as in the last two cases random people were tested. Generally tests are conducted for suspected cases, who have more chance of testing positive.

I-T officers to be fair, courteous; taxpayers should be honest, compliant:...

Independence Day celebrations will be low-key