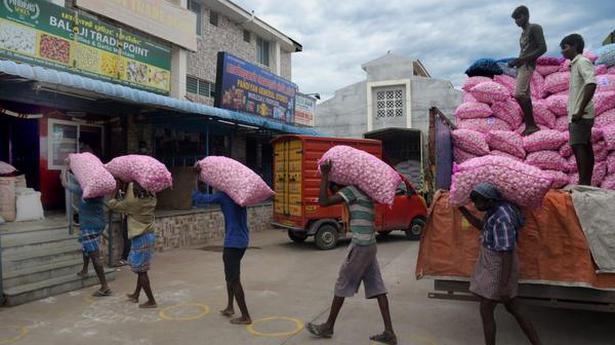 The wholesale food grains sectioned has reopened after four months, and traders said there was a lukewarm response from customers on the first day

After a gap of four months, nearly 60% of the shops at the wholesale food grains section, reopened at the Koyambedu market complex on Friday, with many restrictions to ensure safety against COVID-19.

As the number of shops reopened in the food grains market is lower compared to other sections of the market, there was not much traffic or congestion in the locality. Wholesale traders noted that there was a lukewarm response from customers on the first day of reopening, and said it would take some time for business to improve. The number of vehicles were limited to only 50-60 vehicles, including those that came to unload goods.

P. Pandiarajan, a wholesale food grains trader, said that of the 240 shops that were functioning in the market, about 130 shops were opened on Friday. Most of the shops were only stocking goods and cleaning the site. Other shops are set to be opened over the weekend.

The Koyambedu Market Management Committee (MMC) has put in place several restrictions for the market to operate, including entry and exit from only Poonamallee High Road, and a limited number of customers to visit each shop at a time. Food grains merchants and workers have been given identity cards and two-wheelers have restricted entry into the market.

While residents were not allowed into the market, members of the Koyambedu Food Grains Market General Traders Association noted that nearly 80% of the business was delivered on orders, and was based on credit. Small retailers and residents who came in two-wheelers helped in the cash flow of the trade.

P. Muthupandian, the association’s secretary, said there were a total of 492 shops in the food grains section, and many of them were closed as owners could not carry out trade. Shops were not resold, as sale deed documents are yet to be given to them. “Even among those functioning, about 10-12 shop owners have returned to their hometowns due to losses incurred during the lockdown,” he said.

The association has submitted a representation to the MMC to change the operating hours from the present 9 a.m. to 6 p.m. to 6 p.m. to 2 p.m. the next day. “Our customer base is limited to 2,000-3,000 customers daily, as we mostly deliver on orders. If the timings are changed, it will help retailers to purchase and carry out their work during the day. Wholesalers who faced severe losses over the past few months will also be able to continue business,” said Mr. Muthupandian.