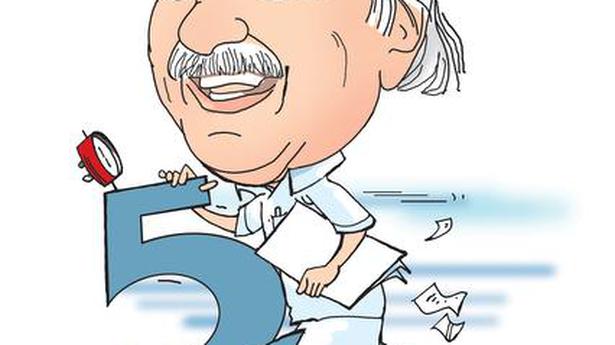 Former Chief Minister Oommen Chandy is celebrating 50 years in public life as a legislator this month.

With the Assembly elections due in mid-2021, the high-profile jubilee celebrations have triggered intense speculation in Kerala about Mr. Chandy’s role in State politics in the time ahead. The critical question appears to be whether Mr. Chandy, with his long experience in government, will position himself as a stable and skilful hand to lead the Congress into the electoral fray once more as its chief ministerial candidate in the 2021 Assembly elections.

In a spate of interviews given to multiple media outlets in connection with the jubilee year, Mr. Chandy has responded to the question with sphinx-like answers. He has shied away from stating whether he will contest the Assembly election from his home turf at Puthuppally in Kottayam again in 2021. The constituency had sent Mr. Chandy to the Assembly for the first time in 1970 and has kept faith with him since.

Mr. Chandy, to his credit, has also endorsed the capacity of other Congress veterans, including Leader of the Opposition Ramesh Chennithala, to assume the mantle of parliamentary party leadership. To those trying to puzzle out whether he would lead again, Mr. Chandy has stated that the answer lay with the national leadership of the Congress.

The party traditionally settles such issues after the elections, Mr. Chandy has stated time and again. He has recurrently maintained that he would play any role the party entrusts him.

Some feel that the somewhat cryptic answers have left the door open for probabilities, conjectures, and political manoeuvring in the Congress in days to come.

By some accounts, Congress leaders close to Mr. Chandy feel the former Chief Minister deserves a second chance at the helm, given his popularity, seniority and experience. They feel he has unfinished business in government and a convincing win would help him start again with a clean slate.

SPB was an enthusiastic actor, full of warmth