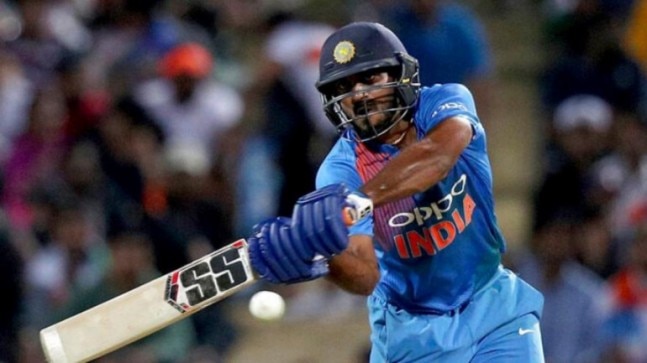 India all-rounder Vijay Shankar was under tremendous pressure during the 2018 Nidahas Throphy final as he was failing to connect his bat with the ball during a crunch situation in the match.

When India all-rounder Vijay Shankar popped on to the international stage, he was seen as someone who would take Hardik Pandya’s role in his absence. Like Pandya, the Tamil-Nadu all-rounder was also a decent medium-pacer who could bat.

The litmus test for the all-rounder came in the final of Nidahas Trophy. Indian team without the presence of Virat Kohli, Hardik Pandya, MS Dhoni was on the verge of losing in the final against Bangladesh.

35 runs were needed from the final 18 deliveries and Vijay Shankar did the unimaginable. The next 4 ball by Mustafizur Rahman went for dots. On the 5th ball. Shankar could just manage to run on a leg-bye chance. The pressure was such that a well-settled Manish Pandey gave his wicket on the last ball of that over.

The day had nothing in store for Vijay Shankar and he played a dot ball off a Soumya Sarkar delivery in the final over as well. 5 runs were needed from the last 2 balls and Vijay Shankar went back into the pavilion while trying to send one in the stands.

Thanks to the magic of Dinesh Karthik, who sealed the deal with a last ball six but a lot of questions were raised on the potentials of Vijay Shankar and some even questioned his place in the squad.

Vijay Shankar in a Star Sports show has revealed that he was embarrassed with that performance but overcame it after remembering a lesson taught by Lakshmipathy Balaji to him in his early days.

Lakshmipathy Balaji had told him, “life is all about handling embarrassments.” The suggestion came to his rescue and Shankar bounced back from there and even made a place for himself in the 2019 World Cup squad of India.

“After Nidahas Trophy, it was embarrassing for me. While overcoming these embarrassments, I remembered these lessons shared by them and it helped,” Shankar said.

“I learnt two big lessons at an early stage from Badri and Bala (L Balaji). Badri said to me ‘if you’re good enough no one can stop you from playing at the highest level’. And Bala told me ‘life is all about handling embarrassments.’ While it sounded something big at that time but when I started experiencing it, I understood it really well.”