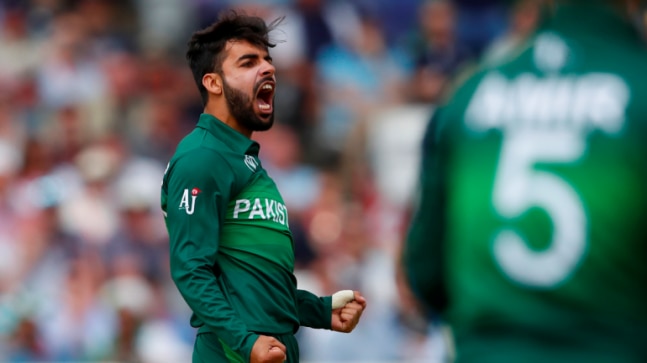 Pakistan cricket was dealt with a massive blow on Monday after the country’s board confirmed that three of it’s players tested positive for Covid-19.

The Pakistan Cricket Board on Monday released a statement saying that Shadab Khan, Haris Rauf, Haider Ali contracted the new coronavirus after being tested in Rawalpindi on Sunday.

The three cricketers were named in the 29-member squad last week for Pakistan’s upcoming tour to England but now their participation will be doubtful. The PCB is sending an extended squad of 29 players in case replacements are needed for anyone testing positive during the tour.

Pakistan are scheduled to play three Tests and as many Twenty20 Internationals against England in August-September in a bio-secure environment following the Covid-19 pandemic.

“Haider Ali, Haris Rauf and Shadab Khan have tested positive for Covid-19. The players had shown no symptoms until they were tested in Rawalpindi on Sunday ahead of the Pakistan men’s national cricket team’s tour to England.

“The PCB medical panel is in contact with the three who have been advised to immediately go into self-isolation.

“Imad Wasim and Usman Shinwari, also screened in Rawalpindi, have tested negative and, as such, will travel to Lahore on 24 June.

“The other players and team officials, barring Cliffe Deacon, Shoaib Malik and Waqar Younis, underwent tests at their respective centres in Karachi, Lahore and Peshawar on Monday. Their results are expected at some stage on Tuesday, which will also be announced by the PCB through its usual channels,” the PCB said in a statement on Monday.

All 29 players will leave for England on Sunday and will be tested twice for COVID-19 before they board the flight to London. Once the team lands in the UK, the players will go through another testing session before they start training in a bio-secured environment.

Pakistan cricketers haven’t played any competitive games since the Pakistan Super League was suspended due to the pandemic on March 17.