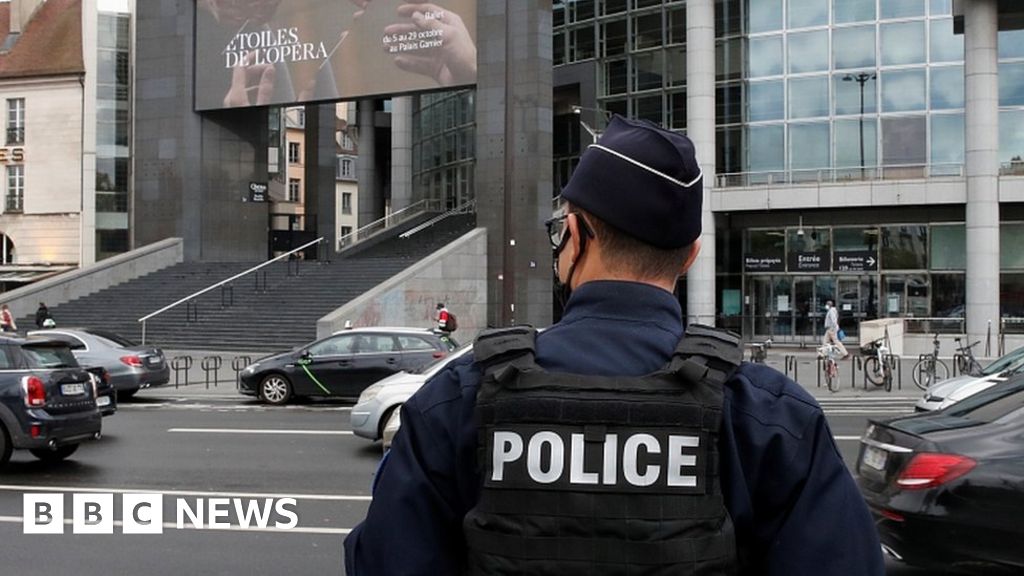 A stabbing in Paris that left two people seriously injured is being treated as a terror attack, the French interior minister has said.

Gérald Darmanin said the attack near the former office of satirical magazine Charlie Hebdo was “clearly an act of Islamist terrorism”.

An eighteen-year-old man of Pakistani origin described as the main suspect was arrested near the scene.

Six other people are in custody and are being questioned, police said.

The victims – a man and a woman who worked at a TV production company – were seriously injured by a machete-type weapon, police said. Prime Minister Jean Castex told reporters at the scene – near the Boulevard Richard-Lenoir – that their lives were not in danger.

The attack came as a high-profile trial was under way of 14 people accused of helping two jihadists carry out the 2015 attack on Charlie Hebdo, in which 12 people were killed.

The magazine has since moved to a secret location.

What do officials say happened?

In an interview with broadcaster France 2, Mr Darmanin described the stabbing as “a new bloody attack against our country, against journalists”.

“It’s the street where Charlie Hebdo used to be. This is the way the Islamist terrorists operate,” the interior minister said.

He said he had ordered security to be stepped up around synagogues this weekend for Yom Kippur, the holiest day in the Jewish calendar.

The main suspect has not been named, but Mr Darmanin said he arrived in the country three years ago “as an isolated minor” of Pakistani nationality.

The minister added that the suspect was not known for being radicalised, but had a previous arrest for carrying a screwdriver.

How did the attack unfold?

Colleagues of the victims said they had been outside the Premieres Lignes news production agency smoking a cigarette when they were attacked.

The firm has offices in the Rue Nicolas Appert, a side street off Boulevard Richard-Lenoir where the former Charlie Hebdo offices are located. A mural to the 12 people killed in the Charlie Hebdo attack is nearby.

“I went to the window and saw a colleague, bloodied, being chased by a man with a machete,” one employee, who asked not to be named, said.

“They were both very badly wounded,” Paul Moreira, the founder and co-head of Premieres Lignes, told AFP news agency.

Police quickly sealed off the 11th arrondissement in eastern Paris and a blade – described as a machete or a meat cleaver – was recovered nearby.

Nearby metro stations were closed and five schools in the area immediately went into lockdown. The schools were allowed to reopen some hours later.

Police said they arrested the main suspect in the nearby Bastille area. Shortly afterwards a man said to be from Algeria was also detained.

Some hours later five other men, said to be of Pakistani origin, were detained in the north-eastern suburb of Pantin during a search of building believed to be the home of the main suspect, French media reported, citing police.

In a tweet, Charlie Hebdo expressed its “support and solidarity with its former neighbours… and the people affected by this odious attack”.

What about the new trial?

Charlie Hebdo marked the start of the trial by reprinting controversial cartoons of the Prophet Muhammad that sparked protests in several Muslim countries.

In response, the militant group al-Qaeda renewed its threat to the magazine.

The magazine’s head of human resources said earlier this week that she had moved out of her home after receiving death threats.

The defendants in the trial are also accused of helping another jihadist carry out a related attack in which he shot dead a policewoman, then attacked a Jewish store, killing four people.

The 17 victims were killed over a period of three days. All three attackers were killed by police. The killings marked the beginning of a wave of jihadist attacks across France that left more than 250 people dead.

Inside Europe’s most infected area

Why Nigerian protesters want Beyoncé to be more like Rihanna