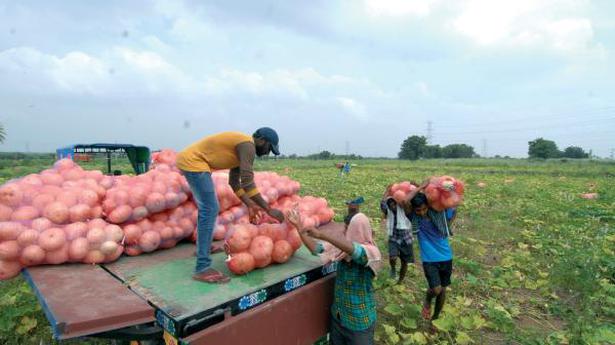 The three farm-related Acts will spell disaster for farming community going by the past bitter experience, especially with contract farming, opine a cross-section of farmers in Prakasam district.

Farmers (Empowerment and Protection) Agreement of Price Assurance and Farm Services Act sought to provide farmers with a framework to engage in contract farming, where farmers could enter into a direct agreement with a buyer before sowing season and sell the produce at pre-determined prices.

However, a group of farmers in Addanki had a bad experience in this regard. Trimurthulu went for cultivation of Tulasi plant (Ocimum tenuiflorum) in 10 acres expecting handsome returns after entering into a buyback arrangement with an agri-commodity marketing firm from Hyderabad

which promised a return of ₹1 lakh per acre. But its representatives did not return to buy the produce.

The plants were grown in over 1,200 acres by the farmers in and around Addanki by spending ₹40,000 per acre.

“No relief is in sight even after moving the local court,” laments another grower K. Subba Rao as the Farm Act ruled out moving a court of law in case of any dispute over the contents of the agreement under contract farming.

In another instance, going by the big returns promised by paper mills, growers took up cultivation of eucalyptus, subabul and casuarina in large tracts of land. “Six years after planting the saplings I am clueless on selling the logs now as the price dropped to about ₹2,000 per tonne as against ₹4,200 per tonne fixed by the State government,” laments a farmer from Chimakurthy, K. Venkaiah.

“It is advantage paper mills as the AMCs are now bypassed by the mills which have created a network of brokers to buy logs,” says All India Kisan Sangarsh Coordination Committee Prakasam district convenor Ch. Ranga Rao, himself a grower in Venkatadripalem village near Maddipadu.

An average farmer does not go beyond the mandal headquarters for marketing. “The so-called freeing of market which the farm Acts facilitate will only work to the advantage of big corporates as remunerative price for farm produce remains elusive for most crops in the absence of market intervention by government agencies,” opines AP Rythu Sangam Prakasam district secretary Vadde Hanuma Reddy.