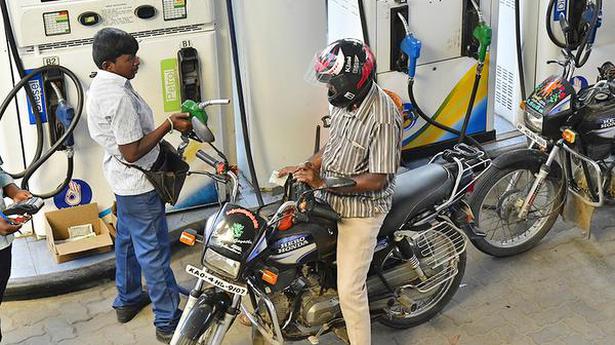 The demand for sensitive petroleum products is likely to rise even more in June with the further easing of restrictions, even as the OMCs have increased prices with effect from June 1.

“Compared with May 2019, petrol sales have fallen by 35% and diesel sales by 28%,” a senior IOCL official told The Hindu.

The OMCs are expecting sales to return to normal levels by June, when most of the curbs may be lifted.

“With significant improvement in May, in June, we expect our sales to reach the pre-lockdown period, if not more,” a BPCL director said.

Cooking gas prices have been increased by ₹11.5 a cylinder to ₹593 in New Delhi and ₹590.5 in Mumbai respectively due to an increase in international LPG prices.

In Kolkata and Chennai, the LPG prices have been increased by ₹31.5 and ₹37 a cylinder to ₹616 and ₹606.5 respectively. The retail selling price of LPG (in Delhi) for May was reduced from ₹744 to ₹581.50 per cylinder for all consumers in line with the drop in international prices.

The prices of petrol and diesel have been increased by ₹2 a litre in Mumbai to ₹78.32 and ₹68.21 respectively as the State government decided to hike the cess on the two fuels. Petrol and diesel prices, however, remained unchanged in other metros.

Indian IT will rebound to 8-10% growth by next year, says Soota