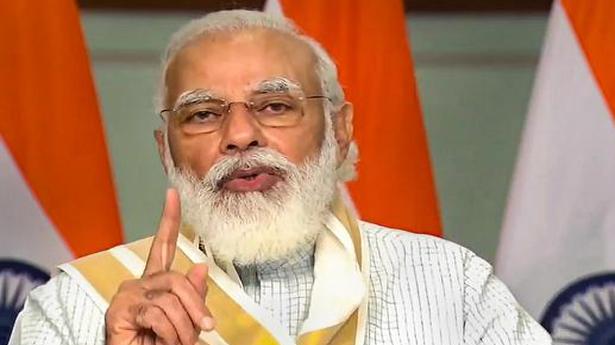 During the same period, an amount of ₹39.68 lakh was collected in foreign currency, according to information now available on the Fund’s website

The PM CARES Fund collected more than ₹3,076 crore in the first five days after it was set up, according to information now available on the Fund’s website.

The Fund was registered as a public charitable trust on March 27, 2020, five days before the end of the financial year. It was announced through a Press Information Bureau press release the following evening, with donors pledging crores of rupees within the first hour.

It is not clear when the information on 2019-20 collections was added to the PM CARES Fund website. The Prime Minister’s Office has repeatedly denied Right to Information requests for details on donations and donors, on the grounds that the Fund is not a public authority under the RTI Act.

Also read | PM CARES is not a public authority under RTI Act: PMO

The FAQs do not provide any information on contributions made from April onwards. Publicly announced donations include over ₹1,000 crore from public sector oil and gas companies, ₹500 crore from employees of the Defence Ministry and the armed forces, as well as ₹500 crore each from the Tata Group and Reliance Industries. In early May, a senior official asked for details about donations and disbursals told The Hindu that an announcement would be made “once a respectable amount of money” had been collected.

As announced by the PMO on May 13, the FAQs also note that ₹3,100 crore have been sanctioned from the PM CARES Fund to be spent on ventilators, migrant worker welfare and vaccine development.

Explained | How different is the PM CARES Fund from the PM’s National Relief Fund?

The Prime Minister’s National Relief Fund (PMNRF), which is also headed by the PM, also publishes information on contributions and disbursals, including foreign contributions, on a yearly basis. The latest data available on the PMNRF website is for 2018-19, when more than ₹534 crore was collected. It had an unspent balance of ₹3,800 crore as of December 2019.