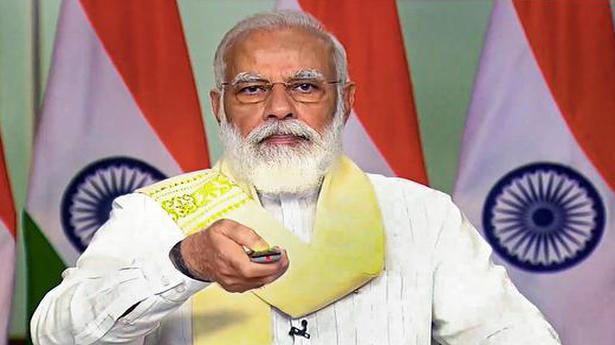 It will provide high speed broadband connections in the union territory at par with services in the mainland.


Prime Minister Narendra Modi on Monday inaugurated the first ever undersea optical fibre cable project for Andaman and Nicobar Islands which will provide high speed broadband connections in the union territory at par with services in the mainland.

“From Chennai to Port Blair, Port Blair to Little Andaman and Port Blair to Swaraj Dweep, this service has started in large part of Andaman Nicobar from today,” Mr. Modi said after inaugurating the project.

The project has been implemented at a cost of ₹1,224 crore.

Iit is the responsibility of the nation to provide modern telecom connectivity to the people of Andaman and Nicobar Islands, the Prime Minister said.

‘Completed ahead of schedule’

All telecom operators in the country will be able to provide their mobile and broadband services using the CANI optical fibre link.

“The optical fibre connectivity project to connect Andaman and Nicobar with the rest of the country and the world is a symbol of our commitment towards ease of living,” Mr. Modi said.

According to official data, internet with speed of 400 gigabyte (Gb) per second will be provided at Port Blair and for other islands it will be 200 Gb per second.

Work of laying undersea cable has been executed by BSNL in a record time of less than 24 months.

This project will give a boost to 4G mobile services and digital services like tele-education, tele-health, e-governance services and tourism on the islands

State-run BSNL will start offering up to 10 times faster broadband speed at 100 mbps and up to 20 times more data download limit for its customers in Andaman and Nicobar Islands from Monday.

“Despite many challenges the project is completed in a scheduled timeline and without any cost overrun. Being a first of its kind project in India, BSNL ensured that the laying of submarine optical fibre cable is completed as per global specification to ensure quality,” BSNL chairman and managing director P K Purwar said.

“For BSNL wire line segment, copper broadband customers are now provided with higher speeds which is up to 10Mbps and up to 15 times more data download ranging from 30 GB to 750 GB in a month on its existing plans,” the statement said.

The data speed restriction after the download limit, will also be enhanced from 512 kbps to up to 2 Mbps in various plans, it added.