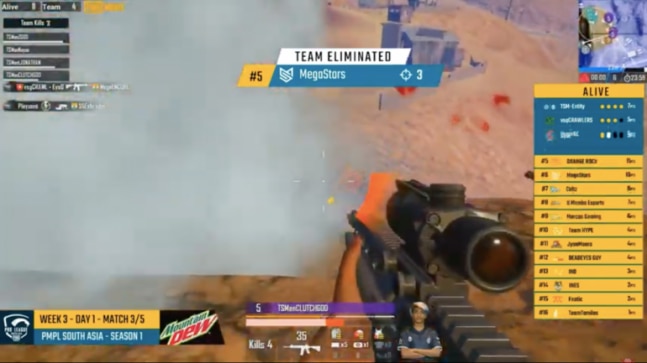 Week 3 started with a bang which was expected as team SynerGE emerged victorious in the first match to claim the Chicken Dinner. The final battle of the nail-biting encounter was between SynerGE and TSM ENTITY in the main circle.

With a total of 13 kills SynerGE collected 33 points from the match, while runners-up TSM-ENTITY aggregated 20 points with the help of 6 kills.

MVP of the match was SGESHRYDER. The SynerGE player killed 6 and registered a Damage score of 767 in the match. The time spent in the match for him was 27 minutes.

TSM-ENTITY’s Jonathan was declared the MVP of match. Jonathan spent 26.59 minutes in the match to register 5 kills and 778 damages.

TSM-ENTITY, the table-toppers looked in hurry to extend their lead at the top of the table as they made it two out of two in the third match of the day.

TSM ENTITY, SouL, MegaStars and vsgCrawlers engaged in a tough battle for the Chicken Dinner in 3rd match of week 3. But TSM-ENTITY held their nerve and showed the reason why they are the ruling this PMPL South Asia 2020

ClutchGod with 6 kills and 752 damages was the MVP of match and helped TSM-ENTITY gain a massive 32-point from the match. The dominace of TSM_ENTITY was such that secon-placed vsgCRAWLERS finished with just 19 points in the match.

Points table after the end of match 3 of week 3

By the end of the match of the match TSM-ENTITY had a comfortable 34 points lead over second-placed ORANGE ROCK. GODLIKE with 411 points is the distant third.

Last week, GODLIKE was the most impressive team with 2 Chicken Dinners as Week 2 of the PMPL South Asia 2020 PUBG Mobile tournament came to an end.