The PMPL South Asia 2020 Day 3 of week 3 ended on a note which everyone one was waiting for. The day was different from the start and new winners keep coming out throughout the day. In fact, the biggest surprise came when TeamTamilas won their maiden Chicken Dinner of the prestigious league.

The points difference also saw a good holistic shift unlike the other days when ORANGE ROCK and TSM-ENTITY kept racking up Chicken Dinners. One another good day for few teams and we can see this competition wide open for everyone. It’s difficult in the game PUBG as a team has to win multiple games to affect changes in the standings but it is surely not impossible.

TeamTamilas showed it on Saturday that there are no favourites in the PMPL South Asia 2020.

The first Chicken Dinner of the day was clincked by a very dominant GodLike teams who left no stone unturned to take a massive 38-point from the match. GodLike looked like a team with some serious plans as they killed 18 players in the match.

The contrast with the second-placed Team Xtreme was, who killed 6 and gained 18 points, was fairly visible. The credit for GodLike perfromance had to go to their MVP KINGXZI as he made as many as 7 kills and 868 damages. The win helped GodLike to slow march towards the 500-point mark.

Standings after the match 11 of week 3 The second match was a shocker for many. 18th ranked TeamTamilas came all guns blazing to win their maiden Chicken Dinner of PMPL South Asia. GodLike came down hard again and gave a tough fight to Tamilas and U Mumba but were ousted after gaining 21 points. The good news for GodLike was that they became the fourth team to get into the 500-point club.

TeamTamila finished with 32 points in the match. MRSPRAY registered 5 kills for Tamilas in his 24 minutes 20 seconds in the match. With the win they shifted in the medals tally my 1 place to 17th. Standings from match 12 of week 3

When it came to the third match of the day an ever consistent SynerGE opened their account for the day. Notably, they had been very consistent on Friday as well and had won a Chicken Dinner in the final match.

MegaStars came a tough run to SynerGe but MVP of the match SGETED made 5 kills and registered 613 damages to see his team comfortable sail through. 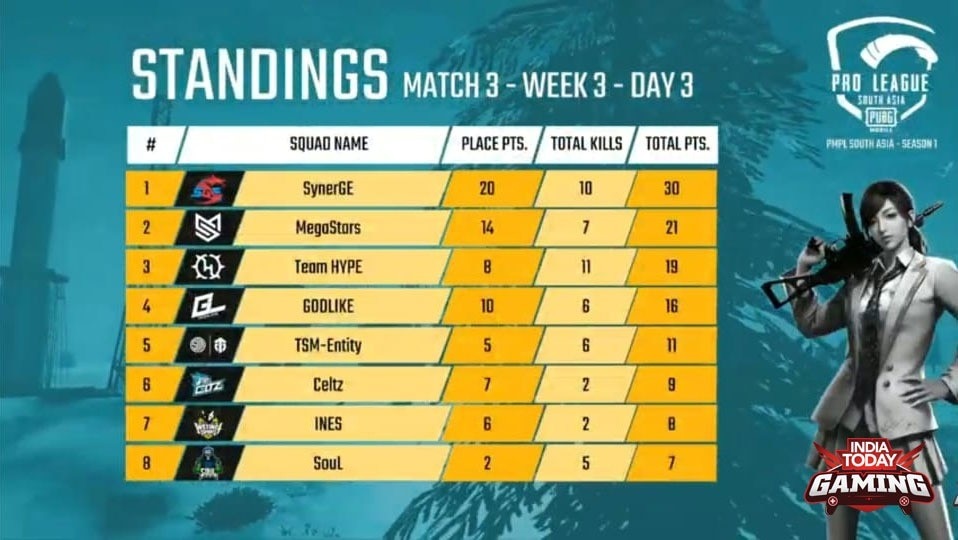 The trend continued in the 4th match. It was good to see different sets of winners as the monopoly of few teams on the points-table was getting very visible. MegaStars won the 4th Chicken Dinner of the day with 25 points. Jyanmaara inflicted the most number of kills (9) in the match but ended up on the 3rd position.

Elementrix came second with 21 points. The stats from the match are good enough to show how closely fought this match was. MegaStars with 486 points was sitting on the 5th position on the overall points-table.

MEGASWAGWNL, who registered 2 kill and 638 damages was the MVP of the match. Standings from match 4 of Saturday

Show starters GodLike were successful in becoming the show stoppers as well. With a massive 32 points (12 kills) they literally rules the Day 3 of week 3. Interestingly, each day of week 3 has seen a single team winning 2 Chiken Dinners. It was TSM_ENTITY on Day 1, OrangeRock on Day 2 and GodLike now on Day 3.

vsgCRAWLERS were the distant second with just 16 points and 2 kills. GODLKINGXZI made 5 kills alone for his team.

GodLike with 8 Chicken Dinners are just 12 points behind third-placed SynerGE in the overall standings. Standings from match 15 of week 3 Overall standings after Day 3 of week 3