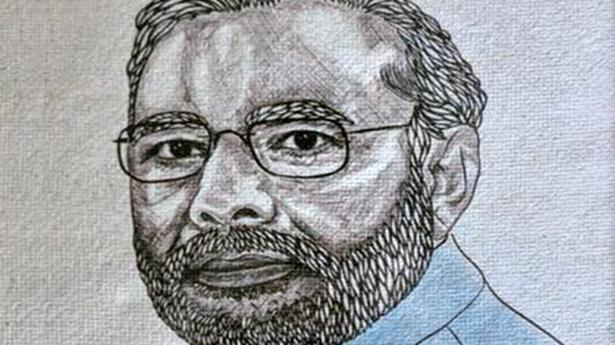 The Centre for Research on Aquatic Resources (CRAR) at SD College, Alappuzha, has released a digital portrait of Prime Minister Narendra Modi printed on a special handmade paper from water hyacinth. It was unveiled by college Principal P.R. Unnikrishna Pillai on the occasion of the 70th birthday of Mr. Modi on Thursday.

It was prepared by a team led by G. Nagendra Prabhu, principal investigator of CRAR, Anoopkumar V., a research scholar, and Sreekuttan V.N., alumnus of Zoology Department, as part of the research and development activities on the value addition of aquatic weeds. The digital portrait was sketched by Anoop over a period of four days.

The CRAR is involved in developing such rural technologies for the past two decades and had made life-size half bust of Mahatma Gandhi and A.P.J. Abdul Kalam using water hyacinth pulp.

along with portraits of political leaders including Oommen Chandy and A.M. Ariff on special canvas made from water hyacinth, which is considered to be a menace to the aquatic ecosystems in the country.