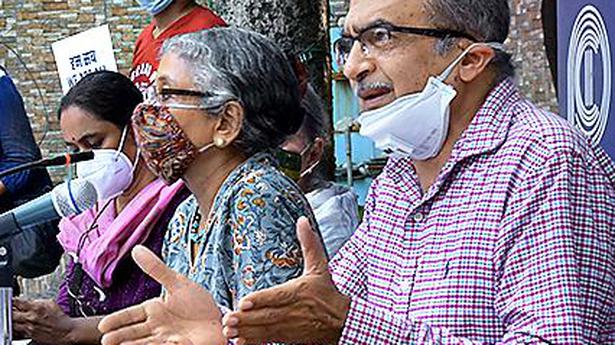 Advocate Prashant Bhushan on Wednesday demanded a probe into the Delhi Police investigation in the communal riots that broke out in the Capital in February this year.

He was among several activists, academics, advocates and teachers who came out in support of former JNU student Umar Khalid, who was arrested on Sunday.

“Some of us wrote to the President some time ago that a commission should enquire into the investigation by Delhi Police, as had happened in 1984 riots. Same thing needs to happen here,” he said during a media conference at the Press Club of India.

Mr. Bhushan said the way the police are investigating is not actually an investigation but a criminal conspiracy by Delhi Police “to frame innocent people who were protesting peacefully against an unconstitutional rule”.

“Those who held peaceful protests… hose who were at the forefront of this movement are being accused of conspiring for riots. Those who helped these people such as Yogendra Yadav, Umar Khalid, professor Apoorvanand and activist Harsh Mander are being targeted,” he said.

“If one looks at the chats on the group, they will know the purpose behind it. The only purpose of that group was to support the exemplary protests,” he said, adding that members of the group are being accused of conspiring for riots.

He reiterated that people like Kapil Mishra and others who used phrases like “goli maaro…” have not been investigated.

Sayeda Hameed, writer and ex-member of the Planning Commission; Kavita Krishnan, CPI-ML leader; Pamela Phillipose, senior journalist; and Nandita Narain, former president of the Delhi University Teachers’ Association were at the event wearing masks with faces of those arrested, including Meeran Haider, Mr. Khalid, Khalid Saifi, Gulfisha Fathima and others.

Mr. Saifi’s wife Nargis said, “They are putting all those who spoke against CAA behind bars so there are no voices against the regime.” Mr. Khalid’s parents were also in attendance but did not speak at the event.

Ms. Sayeda said that the idea of the Centre was to target Muslims and other marginalised communities to destroy the “composite culture” of India. Mr. Mander, whose name is mentioned in a riots case chargesheet, said that he was anticipating his arrest.

Ms. Krishnan, who wore a mask of Gulfisha Fathima’s face, questioned lack of police action against Komal Sharma, a suspect in JNU December violence case. Ms Krishnan, wearing a mask with Gulfisha’s face on it, said that the reason behind it is that she wants her parents to know that they all stand by them.